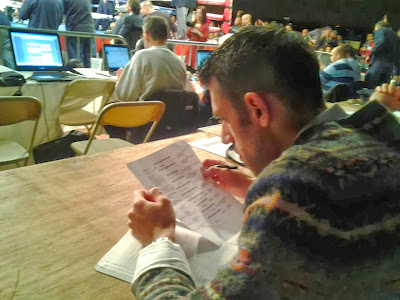 I was able to obtain an interview with NBC shortly thereafter, but I did not acquire a position.

On October 3, 2004, I secured a seasonal stock associate position for Kenneth Cole Productions, Inc. at their flagship store in Manhattan. From there, I became part-time and later, a full-time stock/sales associate.

On April 17, 2006, I began working in the corporate office of Kenneth Cole Productions, Inc. as a Division Coordinator in their Wholesale Department. Subsequently, I was promoted to the Marketing Department in March 2007, where I managed and coordinated the company's samples, collaborating with accomplished editors featuring Kenneth Cole product in major publications & other media outlets.

In May 2009, I created Boxing Ledger.com, a website where boxing fans can read my articles, including interviews with various professional fighters. As a result, I cover fights from ringside across the United States in my spare time.

Currently, I am employed as a CGO Coordinator for Brookdale Shoprite in Bloomfield, NJ.

Thank you for your continued support! You can reach me at michaelseiler11@gmail.com.