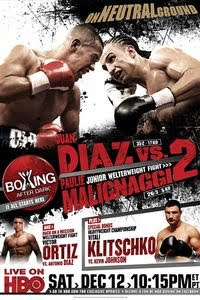 Paulie Malignaggi stayed true to his word. He said he had a "magic trick" in store for Juan Diaz. It seemed that the game plan was to provide Diaz with a target he thought he could hit. Then, hit Diaz with the jab, keep him turning and do not fight as much in close quarters like the first encounter. Paulie executed the strategy perfectly. He successfully utilized his boxing skills more this time around and the judges scored the fight fairly. All three official ringside judges scored the bout 116-111 for Malignaggi. I had it scored slightly better for Malignaggi at 117-110.

From the 1st round, Malignaggi's hand and foot speed bothered Diaz. Malignaggi used his superior boxing skills and jabbed Diaz repeatedly. Then, Malignaggi connected with a clean overhand right. Diaz landed a left hook to the head in the 2nd round, but Malignaggi was doing an excellent job of controlling distance. His feints got Diaz off his game, and he connected again with a clean right. Malignaggi was boxing beautifully, but Diaz hurt himself by not throwing the jab enough to work his way into close range. However, Diaz did a better job during the exchanges in the 3rd round, connecting with left hooks and an overhand right. Yet, Malignaggi was getting his punches off first. Diaz did not move his head well and Malignaggi continued to strike him with his quick, accurate jab.

In the 5th round, Diaz did manage to get close and land some body shots. Diaz hit Malignaggi with an overhand right and left hook. At this point, it was Diaz's best round. Diaz started to work his jab in the 6th round. He was able to nail Malignaggi with a left hook to the body and follow it with a right to the head. Malignaggi fired back. He hit Diaz with a right uppercut in close quarters and followed it with a left hook. Subsequently, Diaz was stunned when Malignaggi unleashed another right uppercut. Malignaggi went back to boxing more in the 7th round, while Diaz's punch output dropped. Diaz appeared to suffer a cut above his left eye in the 8th round. Malignaggi was unrelenting and connected with right uppercuts and overhand rights.

In the 9th round, Malignaggi really worked his jab efficiently. Diaz could not get his punches off. Malignaggi kept snapping the jab and in the 10th round, landed an overhand right that knocked Diaz off balance. Apparently, Diaz's glove touched the canvas and the referee ruled it a knockdown. In the 11th round, Malignaggi was still effectively using the jab to control range, but Diaz started to land his jab and some left hooks.

Diaz got much closer in the 12th round and landed an overhand right. Diaz was aggressive and outworked Malignaggi in the last round. Diaz got the better of the exchanges when Malignaggi chose to battle more. However, Malignaggi did enough to win the fight.

When Malignaggi boxed on the outside, Diaz could not touch him. With little head movement and a lack of an operative jab, Diaz was thoroughly outclassed. At times, Diaz was successful in close range when Malignaggi selected to stand and trade with him. Still, Malignaggi fought well in close quarters.

After the fight, Malignaggi called out Juan Manuel Marquez and stated that the winner could fight Ricky Hatton. Malignaggi also said that he is willing to travel to England for a rematch with Hatton. Malignaggi is a very slick boxer, who would be a favorite against Marquez should the fight take place. Marquez has shown problems when he's faced boxers in the past, most notably against Floyd Mayweather Jr. in his previous fight. Freddie Norwood and Chris John were also able to outbox Marquez easily. Malignaggi could be victorious in a rematch with Hatton, if he executes his fight strategy the way he did against Diaz. Diaz left the ring and did not conduct an interview with HBO's Max Kellerman.
Posted by Michael Gerard Seiler at 8:02 PM