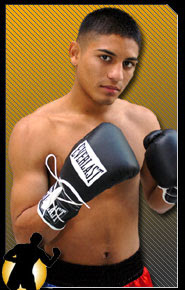 24 year-old Abner Mares is on the fast track to becoming one of the sport’s most elite fighters. He is undefeated as a professional (19-0, 12 KO’s), and possesses swift hand speed and precise volume punching that has enabled him to conquer opponents quite easily. Defensively, Mares fights like a veteran. When standing in front of his opponents, he exerts little energy by using crafty upper body movements.

Mares is one of eleven brothers, and was born in Guadalajara, Jalisco, Mexico, but raised in Hawaiian Gardens, California. While Mares’mother worked many long hours to support the family, he started boxing at the age of 7 when his brother took him to the gym. Abner’s father also boxed professionally.

While growing up, Mares focused on perfecting his craft, which left little time for friends and activities. He never attended his high school prom.

“At 12 years old, my dad instilled strict discipline. From that point, I took boxing very seriously.”

Abner has triumphed over several challengers by implementing a devastating body attack into his arsenal. His body punches remind many of Mexican legend Julio Cesar Chavez.

“Chavez was a big idol for me. We used to get together and have barbecues when he would fight.”

Mares holds a remarkable amateur record of 112-8, 84 KO’s.  In 2002, he captured Gold medals at the World Cadet Championships and the Central American and Caribbean Games. He also won a pair of Silver medals at the 2003 Pan-American Games and the 2004 World Junior Championships. Three of those 112 victories came against Juan Manuel Lopez, who is undefeated as a professional and now fights at 126 lbs.

“The first time I beat Lopez was in his native Puerto Rico. It was by a few points. Then, I defeated him in El Salvador at the 2002 Central American Games.”

At the 2003 Pan-American Games, Mares would beat Lopez again, this time in Santo Domingo, Dominican Republic.

“My corner just kept telling me to pressure and stay on top of him.”

Mares went on to represent his native Mexico at the 2004 Olympic games. However, he suffered a controversial defeat in his first bout against Hungary’s Zsolt Bedak, losing on points 36-27. It seemed Mares was not receiving credit from the judges for his body punching. Bedak now campaigns professionally at 122 lbs. and is undefeated (15-0 5 KO’s). Julio Cesar Chavez and Hector Lopez were calling the action ringside for Mexico, and felt the decision was also unjust.

“I definitely want Zsolt to come to the United States. I would love to fight him again.”

“My dad received a call from Oscar saying he wanted to meet me. The next thing we knew, my father and I were on a plane to Florida to get together with Oscar De La Hoya. What some people do not know is Oscar’s wife, Millie, watched the fight and saw what happened against Bedak. She told Oscar that he should sign me. Oscar told her, ‘You are right.’”

In 2007, one of the most glorifying moments of his early professional career came when Mares won the WBO & NABO Bantamweight titles against Isidro Garcia. Although, that was not the toughest fight Abner had as a professional. His greatest challenge came in a fight he won by a second round knockout against Diosdado Gabi. Entering the bout, Gabi was 30-3-1, 21 KO’s and the first southpaw Mares faced as a professional.

“In the first round, I got into trouble and I wasn’t feeling my rhythm, but I was able to come back and end it in two.”

Mares is willing to fight anyone. At some point, he wants to unify the titles, something that has not been done in the bantamweight division since Enrique Pinder in 1972. No fighter has ever held the WBC, WBA and IBF Bantamweight titles simultaneously. The IBF did not start crowning champions in the bantamweight division until 1984. Pinder won two of the three titles (WBC & WBA) when he defeated Rafael Herrera by a 15 round unanimous decision on July 29, 1972 in Panama.

“I want to unify the titles, and then move up in weight. I started my professional career at 122 lbs., so it won’t be a problem. My goal is not just to be world champ, but to be the greatest, an idol. I want to be the pound-for-pound champ....like Pacquiao.”

Mares could end up facing Yonnhy Perez on May 22nd for the IBF Bantamweight title, as the co-main event to Israel Vazquez vs. Rafael Marquez IV on Showtime. Mares defeated Perez two out of three times in the amateurs. At the moment, a deal has not been finalized.

If he faces Perez, Mares expects a hard fight.

“His right hands are no joke. He never gives up and his conditioning is excellent. I will box him and trade when I am close to him. We will make a good fight.

“Of all the fighters I faced in the amateurs, Yonnhy hit the hardest. I don’t want to take an easy road. Boxing needs good fights, good prospects and new faces. Win or lose, this is a great fight for the sport.”

Mares has not fought since August 27, 2009 when he scored a 6th round knockout over Carlos Fulgencio. He has been training in the gym for the last twelve weeks, and is eager to fight again.

“I would like to fight possibly in March, but if an opponent cannot be found, I have no problem going straight to May 22nd.”

Perez is a tall fighter, who can utilize his height and reach advantage with an effective left jab. Then again, Mares has a plan.

“Sometimes, Perez brings his left jab back low and is susceptible to right hands. I’m going to work his body. We’re working in the gym on attacking the body with left hooks just like Chavez.”

I found your blog on Google and read a few of your other posts. I just added you to my Google News Reader. Keep up the good work. Look forward to reading more from you in the future.watch pacquiao vs clottey