Adamek vs. Estrada Heating Up 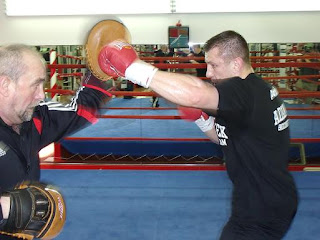 The Prudential Center in Newark, New Jersey is starting to establish itself as a major venue for boxing events. On February 6th, Tomasz Adamek battles Jason Estrada in a twelve round heavyweight clash, which will mark the fifth event hosted by the arena since 2008. It will be Adamek's fourth appearance at Prudential, where he has a strong Polish fan base. Prior to facing Andrew Golota in Poland, Adamek fought at "The Rock" three consecutive times.

"Tomasz has everything and a hard punch. He is very quick, conditioned well and expects to win a hard fought fight. Roger and Ralph have him on an extremely good plan. He is not losing speed or coordination. Tomasz is a very dangerous opponent in the heavyweight division," said Gmitruk.

Adamek appeared very sharp when he was working on the mitts with Gmitruk.

"My cardio is very good. I'm fast, strong and my right hand is most powerful," Adamek stated.

Adamek is becoming immensely popular in New Jersey, where many fans come out to support him at the Prudential Center.

"I am becoming as popular in Jersey City as I am in Poland. I'm very happy fighting in front of thousands of people in Newark."

In preparation for Estrada, Adamek has been sparring with much heavier fighters. He has been training for this fight the last eight weeks. In the past, he had problems making weight at light heavyweight. Now, Adamek feels extremely healthy at heavyweight.

"222 lbs. is very natural for me. I eat more and I'm not hungry. I feel naturally stronger at this weight."

With a win, Adamek will be facing Chris Arreola next on April 24th. Jason Estrada feels that Adamek, and his promotional company Main Events are looking past him. Estrada has won nine of his last ten bouts and has never been knocked out. Previously, Estrada stated his opinion on possibly being overlooked.

"Looking past me toward Arreola doesn't really bother me," Estrada said. "I think it's silly, and they'll hear about it after the fight. I never talk too much, but I'm going to talk like never before after this fight. I hope they keep thinking about fighting somebody else. I'm keeping track of everything, and got names of people to talk about after I beat Adamek. I'm going to shutdown his plans.

"I'm in the gym with sparring partners that are similar to him - tough, stand-up with decent hand speed. They made a big mistake offering me this fight, and an even bigger mistake thinking he has faster hands than me. I've heard that they've brought in guys to work with, who are big, but don't have fast hands. That makes me laugh. How, all of a sudden is he going to have faster hands than me? I am bigger, stronger, faster, quicker and younger than him. I'm just a better all around fighter."

When asked about Estrada's fast hands, Adamek replied, "I have fast hands. My left hand is very strong. My right is stronger."

Estrada is 16-2, with only 4 knockouts. Will Adamek attack him in the early rounds and try to end the fight in a quick knockout?

"I have prepared to go twelve rounds with Roger and Andrew. Wait till February 6th!"

"I need one more belt....heavyweight."