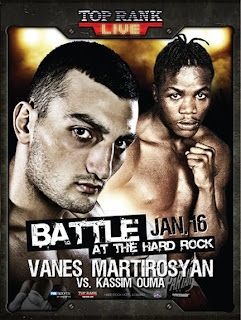 Ouma came back strong in the third round, and pushed Martirosyan back with right hooks and straight lefts. Martirosyan was countering Ouma's right hooks with straight rights. Ouma repeatedly got his punches off first, although Martirosyan finished the round strong.

In the fourth round, Martirosyan kept Ouma turning by using a lot of lateral movement. Martirosyan hit Ouma with many rights to the head and body. After Martirosyan landed a right and left to the body, an accidental clash of heads left him with a cut on his left eye brow.

Ouma stepped up the pace again, while utilizing his right jab in round five. Ouma hammered Martirosyan with a crisp right uppercut in close range. In round six, Ouma struck Martirosyan with numerous right hooks and straight lefts to the head. Again, Martirosyan countered with straight rights to the body and head. In round seven, Martirosyan went back to moving around the ring and caught Ouma with lots of right hands.

Ouma appeared to throw less punches in round eight and when he did throw, it looked as if his punches lost some steam. On the other hand, Martirosyan stepped up his work rate and made Ouma feel uncomfortable the entire round. However, Ouma floored Martirosyan with a short right hook in the ninth round. After that, Ouma battered Martirosyan with consecutive straight lefts, but Martirosyan got his balance back and started to fire right hands.

Both men fought at a furious pace in round ten. Martirosyan's left eye was very swollen. Yet, he closed the final round strong as he wobbled Ouma with a hard left hook to the head. Then, Martirosyan landed a left hook and straight right as the bell sounded to end the fight.

I had Ouma winning the fight 95-94. Personally, I felt the scoring in favor of Martirosyan was too widespread. Both men battled diligently throughout the course of the fight in several close rounds. Ouma even scored a knockdown, although Martirosyan fought fiercely during the remaining minutes of round nine. Without a doubt, Ouma presented Martirosyan with his toughest challenge to date in the spirited junior middleweight division. Ouma showed that he still has a lot of fight left in him after losing two straight bouts. In contrast, Martirosyan acquired tremendous experience by being pushed to the brink of defeat, and should look much improved in his upcoming fights.
Posted by Michael Gerard Seiler at 2:11 AM