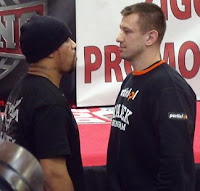 It was a cold and snowy morning in New Jersey, but emotions were sizzling at Hudson Bread in North Bergen, where heavyweights Tomasz Adamek (39-1, 27 KO's) and Jason Estrada (16-2, 4 KO's) came face-to-face before their showdown February 6th at the Prudential Center.

Estrada, 29, has won nine of his last ten bouts and has never been knocked out. He compiled a tremendous amateur record of 261-14, and became the first boxer to win both the U.S. Nationals and U.S. Challenge three years (2001-2003) in a row. On the other hand, Adamek, 33, has won eight straight, and has never suffered a loss above the light heavyweight limit of 175 lbs.

Jason Estrada is promoted by Jimmy Burchfield's Classic Entertainment and Sports, and his father, Dr. Roland Estrada, manages and trains him.

"Estrada is fighting for the U.S.A., his classmates from the 2004 Olympics and future, past and present Olympians. No CES fighter comes to a fight as an opponent," Burchfield stated.

Estrada understands how important this fight is to his career.

Estrada said, "I have been fighting my whole life. This is the hardest I ever worked for any fight. You will have a new IBF champion."

"After this fight, everyone will know how good I can be," Adamek declared.

IBF advisor Larry Hazzard was also in attendance. Hazzard said, "These fights with Adamek are not only good for Newark, but for the entire state of New Jersey. I will be surprised if he does not become heavyweight champ in the near future."

In the co-main event, Brooklyn's undefeated super-middleweight (20-0, 15 KO's) Peter "Kid Chocolate" Quillin takes on Ecuador's Fernando Zuniga (28-9, 20 KO's). Quillin has not fought since stopping Sam Hill in 10 rounds on September 17th, 2008. He is eager to get back into the ring.

"This was one of the best training camps I've had. I got that extra push from Johnny Perez, who works with Floyd Mayweather Jr.," Quillin said.

What makes Quillin improve with each fight?

Quillin stated, "My mind set is more focused on what I want to do. I want the best out of my training.  Everybody is trying to beat me and I cannot give someone that opportunity."

Quillin's trainer, Colin Morgan, assessed training camp: "It was good. We got some sparring in away from New York. We already started training before we went to camp. Sometimes, I just want to settle him down a bit."

Quillin's manager, John Seip, discussed Peter's career status: "We definitely have some things on the burner. Some cable networks are definitely interested in getting a new face, and Peter's mentioned in those areas. We're looking at another fight in the Spring, late March or early April. It could be overseas, but leaning toward New York. Then, we'll take another step up. In the summer, maybe we could face a top three opponent."

"I don't like to get ahead of it. He's coming off a year and a half layoff. We like to go one fight at a time. If everything works out the way we anticipate, this could be a very big year for Peter. He's ready, mature and understands the magnitude of the overall big picture. You have to be mentally ready, as well as physically. It's a matter of adjustment. 'Team Chocolate' is excited about where we are right now. He's 26-years-old, but a young 26-year-old as far as boxing is concerned. He hasn't been through any real wars yet. He's had some injuries, but that's been pain to his hands. Unfortunately, he had an appendectomy before his last fight. He's had a rash of injuries that are part of an athlete's life. We weathered it, and we're coming out stronger. He's looking better than before the injuries. It's all good things."

John Seip's assessment on Quillin improving with each fight: "Maturity and experience. Training changes as his level gets higher. The landscape changes. You can't step back on the ladder. You have to keep going forward. We have a strategy and a game plan. We're in no rush. We're going to put him in there with very competitive fighters and see what happens."


Undercard
In a middleweight bout, Denis Douglin (6-0, 3 KO's) faces Eddie Hunter (3-1-1, 1 KO). After having problems at school, Denis started boxing at eight years old with his uncle training him. At 12 years old, his mom started to train him in their house. After moving to New Jersey, he could not find a coach, so his mom continued to train him. He's had over 90 amateur fights. Douglin has won his last two fights by unanimous decision.

Douglin stated, "I've been working real hard. I have been training for this fight since October. I had three fighters cancel on me. This is all just polishing up and staying in shape. We had a twelve week camp, so I'm motivated. The fight is at 160 lbs., but I wanted it at 154 lbs. I was 157 lbs., but I've been eating to get my weight back up. I've been fighting guys a lot bigger than me and it's affecting my knockout percentage. I want to stay at 154 lbs. for now."

In a four round cruiserweight bout, Patrick Farrell (4-0, 3 KO's), New Jersey, battles Jon Schneider (7-4-1, 5 KO's), New York. Farrell only had 12 amateur fights, but is quickly making his mark as a professional.

Farrell acknowledged, "Training camp went good. After seven weeks, I feel great. I'm looking forward to putting on a good show. Jon has a lot of experience, and is the first southpaw I am facing as a pro. I sparred about 45 rounds with light heavyweight Yathomas Riley (7-0, 5 KO's). I'm very prepared."

wow i had a nice time reading updates in boxing, you know just recently this sport is really becoming one of the favorite sports of filipinos.take care