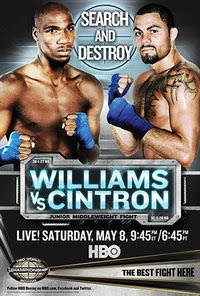 In a bizarre ending to a bout that was heating up, Paul Williams (39-1, 27 KO's) was awarded a four-round, technical decision over Kermit Cintron (32-3-1, 28 KO's). Cintron, 30, got tangled up with Williams, 28, in round four, and both men tumbled. However, Cintron fell through the ropes onto the ringside table. Then, Cintron rolled to the floor of the Home Depot Center, where he lay motionless for several minutes until paramedics stabilized him on a stretcher. Apparently, he injured his back and/or neck. According to referee Dr. Lou Moret, Cintron wanted to continue, but the California ringside doctor stopped the fight. The official scores read 40-36 and 39-37 for Williams, while Cintron received a 40-36 tally.

In round one, Cintron looked to land his right as Williams tried to score with his straight left. Cintron caught Williams with some short left hooks. Toward the end of the round, Williams connected with a sharp right uppercut.

Cintron controlled range and the pace in round two, landing counter rights when Williams charged forward. Clearly, Williams needed to step up his level of aggression.

In round three, both men jabbed, however, there was little exchanging. Williams was much more active this round, stepping up his punch output and landing a straight left in the final seconds.

Williams stunned Cintron after landing three straight lefts in succession. Yet, Cintron countered quickly, staggering Williams with a thunderous right to the head and following up with a left hook. Subsequently, both fighters twisted when Williams tried to clinch and the disastrous incident occurred.

Under California rules, a fight can go to the scorecards after an accidental foul takes place, if three rounds have been completed.
Posted by Michael Gerard Seiler at 12:20 AM