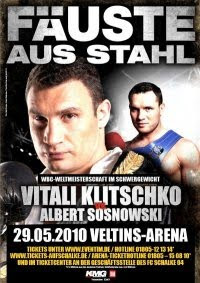 Vitali Klitschko (40-2, 38 KO's) retained his WBC heavyweight title, knocking out a tough Albert Sosnowski (45-3-1, 27 KO's) at 2:20 in the tenth round of a highly competitive fight. The victory was Klitschko's eighth in a row.
In round one, Klitschko utilized his left jab, while Sosnowski aggressively looked for openings. Klitschko attacked Sosnowski more in the second round. Still, Sosnowski used lots of lateral movement and feints, as he tried to stay away from Klitschko's power.
Sosnowski landed a counter left hook in round three that briefly drew cheers from the crowd. Sosnowski showed great self-belief, moving assertively toward Klitschko the entire round.
In the first minute of round four, Klitschko caught Sosnowski with a short right. After that, Sosnowski dictated the pace of the round, keeping extremely busy by getting his punches off before Klitschko.
However, Klitschko answered with a strong fifth round, striking Sosnowski with multiple left hooks and right hand shots. MMA GEAR
Klitschko landed the cleaner punches in round six, hitting Sosnowski early with right hands and left hooks. Nevertheless, Sosnowski was very forceful with his jab in the second half of the round.
Again, Klitschko was more fluid with his punches in round seven, connecting more often than Sosnowski. Yet, Sosnowski relentlessly kept putting on pressure.
Sosnowski landed the best punch in round eight, sending Klitschko back after connecting with a stinging overhand right. Shortly thereafter, Klitschko answered with a clean left hook.
Klitschko opened the ninth round by landing an overhand right. Then, Klitschko used his left jab steadily and found his range, which enabled him to hammer Sosnowski all through the round with right hand blows.
In round ten, Klitschko's right hand was finding the target easily. With 32 seconds to go in the round, Klitschko floored Sosnowski with a powerful overhand right that sent him into the corner. Referee Jay Nady immediately stopped the bout.
BANKS, GAVERN BATTLE TO MAJORITY DRAW
In other heavyweight action, Johnathon Banks (24-1-1, 17 KO's) and Jason Gavern (19-7-4, 8 KO's) battled to a twelve round majority draw in a fight filled with excessive holding. Official scores were 115-111 for Banks and 113-113 twice.
In round four, Banks used his left jab repeatedly, but put little behind it. Then, he connected with a short left hook to Gavern's head. Gavern was tying Banks up at every possible moment. Finally, Gavern was deducted one point for his wrestling tactics in the sixth round.
Both men exchanged solid left hooks in round seven. However, Banks lost one point for unnecessary holding. In round eight, Banks connected with a quick left hook that seemed to floor Gavern. Yet, referee Juergen Langos ruled Gavern had slipped. After that, Banks landed a series of damaging overhand rights.
Banks momentarily stunned Gavern with a right - left combination in round nine after connecting with a counter left hook.
In an uneventful twelfth round, Gavern pressed the action and scored with his right hand when he got Banks against the ropes. Banks did not utilize his jab enough in the final round.
Posted by Michael Gerard Seiler at 6:02 PM