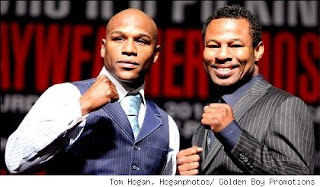 Mayweather opened the fight as the aggressor, walking toward Mosley and daring him to throw punches. Then, Mosley responded by connecting with a few solid left jabs that penetrated through Mayweather's guard in round one.

In round two, Mosley seriously hurt Mayweather when he connected with a rock-solid overhand right. However, Mayweather weathered the storm and landed a left hook to Mosley's body followed by an overhand right late in the round.

"Only the strong survive," Mayweather stated as soon as the bout ended. "You must suck it up hard and keep fighting like a warrior."

From that point, Mayweather took full control of the bout in round three, landing left hooks and lead right hands in succession.

In round four, Mayweather struck Mosley with a sharp, counter left hook. After that, Mayweather damaged Mosley frequently with lead right hands.

Mayweather constantly got his punches off before Mosley, which enabled him to dictate the pace of the fight. As he started to find his rhythm, Mayweather put his punches together and in round five, he stunned Mosley with numerous left jabs, lead rights and left hook - right hand combinations.

When they were in close range, Mayweather missed with a left hook, but hurt Mosley when he landed a right uppercut in round seven. Mayweather's punches continued to find the target precisely, as Mosley showed no answer for Mayweather's lead right hands.

In round nine, Mosley neglected to move after delivering an overhand right and Mayweather made him pay, landing a punishing right that momentarily snapped Mosley's head back.

After absorbing a right hand by Mosley, Mayweather quickly countered with consecutive right hands in round ten. Later, Mayweather battered Mosley with a right to the body followed by a straight right - left hook combination to Mosley's head.

Mayweather's lead right hands were breaking Mosley down. In the eleventh round, Mosley got into close quarters with Mayweather, who was forced to fight him off using a swift jab. Then, Mosley hit Mayweather in the body with a left hook. Mayweather answered yet again, connecting with lead rights and left hooks. Next, Mayweather dazed Mosley with a clean left jab.

Mayweather jabbed and kept beating Mosley to the punch in round twelve. First, Mosley hit Mayweather with shots to the body. Then, Mayweather fired and landed an overhand right. Finally, Mayweather stayed strong in the pocket and used lateral movement to close the show.

"I couldn't adjust," Mosley explained to HBO's Larry Merchant after the fight. "He adjusted and that's why he won the fight."

In Floyd Mayweather Jr.'s case, it’s not about the amount of times he wins anymore; it’s all about the ‘0’ in his loss column. The ‘0’ on Mayweather’s record is sacred to him. He takes tremendous pride in being undefeated, as he boasts on a regular basis that he is the best ever, saying he is even better than “Sugar” Ray Robinson and Muhammad Ali.

"If Manny Pacquiao takes the blood and urine test, we'll have a fight," Mayweather declared. "If he doesn't, we don't have a fight."

For boxing to resonate among all sports fans, Mayweather and Pacquiao must battle each other. After Mayweather’s brilliant performance tonight, maybe the question now should be – Does Manny Pacquiao actually desire a fight with Floyd Mayweather Jr.?

UNDERCARD
OUALI TKO'S SALDIVIA
In a welterweight bout, Said Ouali (27-3, 19 KO's) scored a 1st round technical knockout against Hector Saldivia (33-2, 26 KO's). The official time of stoppage was 1:47.
Ouali, 30, got hurt by a hard, straight right from Saldivia, 26, and fell to the canvas. Next, Saldivia hammered Ouali in the corner with a series of right hands. Then, Ouali, a southpaw, floored Saldivia with a sharp counter left. Saldivia was surprised, and Ouali hit him again with a right hook - straight left combination. Finally, a crisp right hook from Ouali put Saldivia down a second time and referee Russell Mora stopped the bout.
PONCE DE LEON DECISIONS LOCK
Daniel Ponce De Leon (39-2, 32 KO's) won a ten round unanimous decision over Cornelius Lock (19-5-1, 12 KO's) in a featherweight bout. The judges' official scores were 97-93 and 96-94 twice.
De Leon, 29, assaulted Lock's body repeatedly with vicious left hand shots throughout the fight. In the 1st round, De Leon used a stiff right jab to back Lock up and landed clean straight lefts. Then, De Leon wobbled Lock, 31, in the 2nd round when he connected with a counter right hook. Lock circled and snapped his right jab, but De Leon continually got his punches off first.
Lock connected with counter right hooks in the 3rd round, although De Leon was extremely accurate with his blows. In the 4th round, De Leon continued to press the action. Later, Lock landed a sweeping right hook that landed on De Leon's head. During the round, De Leon suffered a minor cut above his left eye, which resulted from a punch.
Lock wobbled Ponce De Leon in the fifth round with a counter right hook. As a result, De Leon sustained some swelling under his left eye. In round six, De Leon frequently hammered Lock with brutal lefts to the body and head.
Lock successfully scored with a counter right hook in round nine, but had little steam on his punch. Consequently, De Leon moved aggressively toward Lock and scored with the harder, flush shots.
Lock nailed De Leon with consecutive straight lefts late in round ten. However, De Leon landed the cleaner, more damaging blows the entire fight and dictated the pace.
ALVAREZ TKO'S COTTO IN 9TH
After suffering a scare in round one, 19-year-old welterweight prospect Saul Alvarez (32-0-1, 24 KO's) soundly defeated Jose Miguel Cotto (31-2-1, 23 KO's), stopping him in the ninth round.
Cotto staggered Alvarez in the first round, sending the young Mexican fighter into the ropes after connecting with a massive left hook. Then, Cotto landed a series of rights and lefts. However, Alvarez pulled it together and hit Cotto with a vicious right uppercut in round two, forcing Cotto's glove to touch the canvas, which resulted in a knockdown being scored.
From there, the fight was very competitive. As Cotto moved forward with his head down, Alvarez landed a stinging right uppercut to Cotto's chin in round three. Later, Cotto and Alvarez exchanged hard left hooks and sharp right hands.
In round four, Alvarez again connected with a short uppercut and landed right hands in succession. Cotto was aggressive in rounds five and six, but Alvarez showed a great deal of patience and displayed competent instincts, placing his punches with remarkable success.
In round seven, both men fought fiercely in close range. However, Alvarez got the best of Cotto in round nine, landing powerful right hands over and over again. Cotto slipped some shots, but Alvarez kept firing. Then, Cotto unleashed a left hook with little behind it. Lastly, Cotto stopped throwing and Alvarez continued smashing him with right hands, which prompted referee Tony Weeks to stop the bout at 2:51.
Posted by Michael Gerard Seiler at 2:28 AM