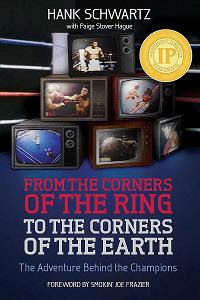 New York, NY: (May 27, 2010) – Hank Schwartz is the most famous boxing promoter you’ve never heard of. He and his vice-president, Don King, were the promoters of what is still considered the most famous fight in boxing history – the Muhammad Ali-George Foreman “Rumble in the Jungle” fought in Zaire in 1974. His hilarious thrill-a-minute memoir From the Corners of the Ring To the Corners of the Earth: The Adventure Behind the Champions (CIVCOM 2010) KO’ed an undercard of three contenders and took the 2010 Independent Book Publisher’s Gold Medal in the Sports Division. The book and its author team were honored in New York on Tuesday night at the IPPY Awards Gala held in conjunction with the BookExpo.

Beginning with the historic Ali-Frazier I in Madison Square Garden, where Schwartz broadcasted Ali’s first professional defeat to the world, and ending with the tragic Ali-Holmes fight in Las Vegas, this eye-opening book tells the riveting story of the crisscrossing battle for the heavyweight championship waged between Joe Frazier (who contributed the foreword to the book), George Foreman, and Muhammad Ali. Along the way, Schwartz was responsible for the live broadcast, production, and promotion of the Golden Era of the heavyweight title – Foreman-Frazier in Jamaica, Foreman-Norton in Caracas, the “Thrilla in Manila” and the legendary “Rumble in the Jungle”.

“This book tells the back story of these fights which has never been told before. Boxing fans around the world know what happened in the ring. This book tells the amazing story of how these fights were put together – how they were financed, how they got the fighters under contract, how they worked with the governments in these third-world countries and the socio-political issues that were swirling all around them, what they had to do to get the video signal up to the satellite so the pay-per-view broadcast could happen…, Hank’s story provides context and a whole new perspective on these events,” says Paige Stover Hague who collaborated with Schwartz to author and publish the book.

Smokin’ Joe Frazier, who fought for and defended the heavyweight title several times during the timeframe covered in this book, said in his foreword, “All of us in the fight mob owe a debt of gratitude to Hank Schwartz… I thank him for being a significant factor in the strength of the bond that held us all together then, and in keeping the legend alive now. It was a glorious time to be a heavyweight champion. The shimmer of the gold that distinguishes our era would not be as lustrous if it were not for Hank Schwartz.”

“The story behind the fights is just as, if not more, intriguing than what happened in the ring.” says Gene Kilroy, Muhammad Ali’s business advisor, “Hank includes all the people and the political, social and economic happenings that made up the golden era of the heavyweight title. This book tells it all. I was there, I lived it, and Hank has captured it all in this accurate retelling of the unbelievable story that was the best the boxing world has ever seen.”


The medal was presented to Schwartz by Jim Barnes, Awards Director for Independent Book Publishers, who commented, “We saw spectacular work in so many categories – so much creativity, so much passion -- so much truth. The main thing I’ve learned about independent authors and publishers over the years is that they tell the truth. We judged passionately truthful memoirs and biographies, soulfully truthful self-help books, and brutally honest critiques of our social and political systems. It is this dedication to truth and the art of literature that makes these awards worthwhile...”
Pre-publication orders for the book can be placed on the web site at www.CornersOfTheRing.com. The title is expected to launch July 1.
For more information on the book or the author, please visit www.CornersOfTheRing.com. To request a review copy, contact Luke Messecar at luke@ictusinitiative.com or (617) 717-8294.


Henry A. (Hank) Schwartz, born in Brooklyn, is an expert in video communications technology. He was involved in the broadcast, promotion, and distribution of notable boxing matches involving fighters including Muhammad Ali, Joe Frazier, and George Foreman during the 1970’s. An authority in microwave and satellite technology, Schwartz utilized his expertise to telecast major boxing events such as “The Rumble in the Jungle” in Zaire, “The Thrilla in Manila” in the Philippines, as well as other major events in Kingston, Jamaica; Caracas, Venezuela; Kuala Lumpur, Malaysia; and Madison Square Garden in New York. From 1974 to 1978 Schwartz served as Minister of Communications for the former Republic of Zaire.


Hank has designed systems for E.I. Dupont, Western Electric, Bell Telephone, Westinghouse Electric, Revlon, RCA and others. He served in the US Army in WWII and then attended Brooklyn Polytech, from which he received his Bachelor of Electrical Engineering degree (BEE). Schwartz holds a number of patents and patent applications in the electronics and visual communications fields.
Posted by Michael Gerard Seiler at 10:51 PM

Nice job. Thanks for the write up. I've never heard of the book, but just may grab a copy & check it out.