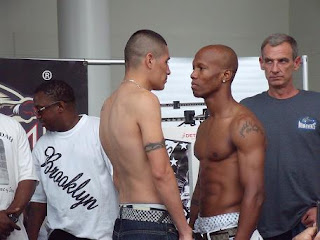 (Marshall Enzer is pictured far right)
Marshall Enzer started his brilliant career in the boxing industry as a helper in a small backyard makeshift gym in called Ten Goose Boxing. Marshall approached Mr. Joe Goossen for a job, but was turned down because he could not work without a permit at 14-years-old. After attempting 6 more times to get a job at Ten Goose Gym, Joe finally let him work for what has become one of the biggest boxing promoters and trainers in the world today, Goossen Tutor Promotions.

Goossen Tutor promotes of Andre "SOG" Ward, Paul "The Punisher" Williams & Chris "The Nightmare" Arreola. worked under Joe Goossen at all the local fight cards in the 's Reseda Country Club, which is no longer open. At the young age of 17-years-old, Marshall had already learned to wrap the fighter's hands, and tend to their swelling and cuts if any occurred during a bout. At 23-years-old, Marshall worked his first World Championship fight as a licensed cutman in Nevada with Mike "Second To" Nunn when he fought Juan Roldan for the IBF Middleweight title in Las Vegas, Nevada. Marshall has earned his spot in the boxing world as one of the best managers and cutmen in the business today. Marshall also learned from the likes of Joe Chavez , Rafael Garcia & Jacob "Stitch" Duran and most of all, Joe Goossen himself.

Marshall Enzer has worked the corner for Michael Nunn, Gabriel Ruelas, Rafael Ruelas, Frankie Duarte, Oliver McCall, Hasim Rahman, Ron Johnson, Daniel Judah, Joseph Judah, Joel Casamayor, Yuriorkis Gamboa, Erislandy Lara, Lionel Butler, Mia St. John and many other numerous fighters around the world. On Friday night, Marshall will be Zab Judah's cutman for the 3rd time when Judah battles Jose Armando Santa Cruz in a sizzling junior welterweight showdown at the Prudential Center in Newark, N.J. After the weigh-in, I had a chance to speak with Marshall about Zab's training camp.
Mt. Charleston, the highest summit of the Spring Mountains (11,918 ft.) on the west edge of Las Vegas, Nevada, is where Zab Judah did a series of intense running to prepare for his upcoming bout against Jose Armando Santa Cruz.
"Zab changed all his living habits to prepare for this fight," Enzer noted. "He ran 3 times a week at Mt. Charleston, which is 8,000 feet above sea level. It was Eddie Mustafa Muhammad's idea."
Eddie Mustafa Muhammad also helped Zab get ready for his bout with Santa Cruz, however, a prior obligation to work the corner for Ishe Smith on Friday night in Southaven, Mississippi will prevent him from being in Zab's corner.
"Zab did a 90 day training camp," stated Enzer. "He didn't start sparring until the 8th week of camp. Once he got down to 145 lbs., we began working on strength and nutrition.
"Zab sparred multiple rounds with Anthony Lenk from Johnny Tacco's Boxing Gym in Las Vegas, Nevada, along with Ishe Smith and undefeated light heavyweight, 'Bad' Chad Dawson in preparation for Santa Cruz. All of the sparring took place at William Haney's H.I.T. Factory Boxing Gym located at 2006 Paradise Rd., Las Vegas, Nevada, 89104, (Tel) 702-485-4422."
Marshall Enzer also serves as the General Manager of the H.I.T. Factory in Las Vegas, Nevada, which is the boxing gym where Zab Judah, Chad Dawson, Celestino Caballero and Guillermo Rigondeaux currently train. 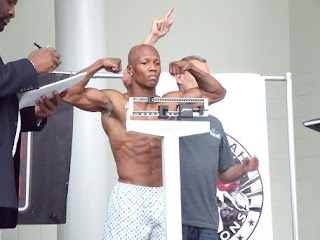