Judah Prepares For Clash With Matthysse 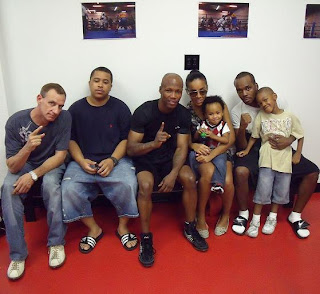 
On Saturday, November 6th, HBO will televise its first fight from the Prudential Center in Newark, New Jersey when Zab "Super" Judah (39-6, 27 KO's) battles Lucas Matthysse (27-0, 25 KO's) in a 12-round, junior welterweight collision. Judah has won three fights in a row and five of his last six. On the other hand, Matthysse is undefeated, and holds four consecutive knockout victories.

On Tuesday, I caught up with Zab while he was training at the H.I.T. Factory Boxing Gym in Las Vegas, Nevada. He seems enormously eager to continue proving that he is the best junior welterweight in the world. Originally, the November 6th date was being held for Tomasz Adamek. When a fight for Adamek could not be scheduled in November, HBO immediately turned their attention to the former undisputed welterweight champion of the world.

After failing to land a bout with Amir Khan, Devon Alexander and Timothy Bradley, Matthysse was willing to step to the plate and fight Judah. As a result, Judah has a high regard for his opponent.

"I have a 100% respect level  for Matthysse," stated Judah. "I don't know what he knows about me, but I already studied everything he's doing. He's a young guy trying to pursue a career."

After scoring an impressive 3rd round stoppage against Jose Armando Santa Cruz in July, Judah is not changing his regimen for this fight. Twice a week he runs a combined 11 miles at Mt. Charleston (11,916 ft.), highest of the Spring Mountains in southern Nevada, while continuing to work hard every day in the gym.

"My whole team makes sure I stay sharp," said Judah. "I have the best conditioning, I'm in the best physical shape and the rest is 'God Speed'."

Marshall Enzer, who is Judah's official cutman and handwrapper, has stated that Zab is without a doubt in the best shape of his life.

"All I could do is pray that Matthysse comes out of the fight okay," stated Enzer.

Morris East, trainer and coach for Judah, is grateful to Eddie Mustafa Muhammad for getting the opportunity to work with Judah, and believes he will dominate on November 6.

"I know Zab is going to win this fight," said East. "He'll be champion again." 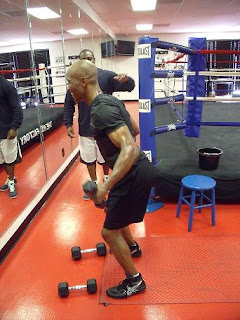 (Zab Judah lifting weights; Photo Credit: Michael Seiler)
Judah was back in the ring training a week after his victory over Santa Cruz. He was initially supposed to take on Michael Clark on October 2nd until the fight with Matthysse came up.

"We knew we had the October 2nd date, so I was already in great shape," confirmed Judah. "I was 50% ready for November 6. We started sparring last Thursday. Now, I'm coasting and paving the way for myself. I'm ready to go." 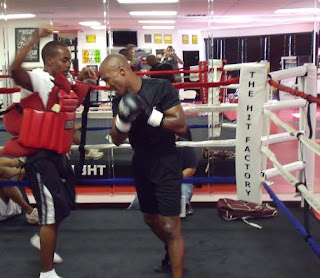 (Zab Judah working with Roscoe Spade; Photo Credit: Michael Seiler) ﻿
Roscoe Spade, trainer and friend, believes people are underestimating Judah's skills at this stage in his career due to hearsay.

"Before Mayweather, Alexander and other A-class elite fighters, there was a 28-0 Zab Judah," said Spade. "For Matthysse to take this fight and think he is going to win, he's obviously very mistaken. 'Super' Judah will be coming at him in 3-D."

Matthysse likes to stalk his opponents, striking them with his power shots. However, Judah has seen it all in his 14-year professional career and welcomes the challenge.

"He knocks his opponents out viciously with his come-forward style," declared Judah. "He reminds me of me when I was younger."

Judah added, "But he's getting in the ring with a superb, sharp and skilled veteran.

As for a future bout with Khan, Alexander or Bradley, Judah is not even thinking about them. He is exclusively focused on Matthysse.

"They're stepping stones," claimed Judah. "I'm fighting different wars right now. If they're in my way, I'll fight them. I'm just building and going along."
Posted by Michael Gerard Seiler at 4:48 PM

nice to see you writing

Hi, your way of telling is nice and good to see you writing.