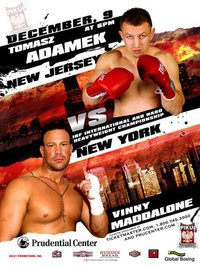 On Thursday, December 9, Tomasz "Goral" Adamek (42-1, 27 KO's) makes his 6th appearance at the Prudential Center in Newark, New Jersey when he squares off against Vinny Maddalone (33-6, 24 KO's) for the IBF International Heavyweight and NABO Heavyweight Championship. The bout will be televised LIVE on Integrated Sports PPV.

Vinny Maddalone's launch into the sport occurred during his freshman year at Pfeiffer University in North Carolina, where he received a scholarship to play Division II baseball. In 1992, Maddalone entered a toughman competition on a Friday night and won. On the following night, Maddalone beat 3 guys and took home a $1,000.00 for his efforts. Subsequently, Maddalone went on to earn a Bachelor of Arts degree in Criminal Justice in 1996. He played 2 seasons in 1996 and 1997 for the Adirondack Lumberjacks, a baseball team in the Northeast Independent League. However, Maddalone sustained tendonitis in his right arm and was placed on the 14 day disabled list. On the 8th day, he was released. As a result, Maddalone boxed in the New York Golden Gloves in 1997 and 1998. Finally, he entered the professional ranks in 1999, starting his professional career 21-1, 15 KO's.

Now 36-years-old, Maddalone enters the most meaningful fight of his professional career when he steps into the ring to face Adamek. Maddalone applies steady pressure and possesses enormous power in both hands, which presents a dangerous challenge for the Polish warrior. He is coming off a 5th round TKO victory against Dominique Alexander in his last fight. On the other hand, Adamek, 33, will fight his 5th bout at heavyweight, a weight class where he has been able to dominate rivals with well-timed punches, improved ring generalship and superior hand speed. Adamek has won 11 consecutive fights.

Roger Bloodworth, Adamek's trainer, believes his fighter's hand speed is one of his biggest assets heading into this fight.

"We're working a lot on head movement and adding a little more pop in his punch," admitted Bloodworth. "When your fundamentals become extraordinary, you become a greater fighter. He's becoming very quick."

Maddalone became a fan of the sport after watching Vinny Pazienza battle Greg Haugen in 1987. He has always enjoyed watching Rocky Marciano, Jake Lamotta and many other old-time fighters. Against Adamek, Maddalone plans on using a similar straightforward style.

"Adamek is a proven champ that moves in and out well," acknowledged Maddalone. "He definitely keeps his hands up and throws a lot of punches. However, I am going to dictate this fight. I am going to fight my fight and just work on that."

Maddalone added, "Arreola put pressure on him, but not enough pressure. I am going to keep coming. My pressure alone will wear him down."

Adamek has watched film on Maddalone, and believes he will make an exciting fight on December 9th.

"He can bring many fans from New York to the Prudential Center," declared Adamek. "But I'm a better boxer now, and much stronger working with Roger."

The winner of this fight will be a mandatory challenger for Wladimir Klitschko's IBF heavyweight title. Maddalone has other plans, and embraces his role as an underdog.

"It's okay that Adamek and his team are looking past me," noted Maddalone. "I'm just going to jump on his spot and fight Wladimir Klitschko."
Posted by Michael Gerard Seiler at 4:24 PM

I think Adamek has this one in the bag