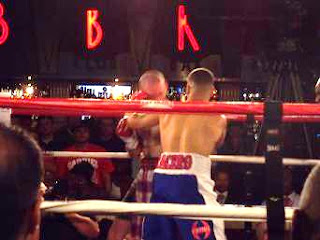 BRACERO OUTPOINTS BUTERBAUGH
Gabriel Bracero (12-0, 1 KO) won an eight-round unanimous decision against Terry Buterbaugh (6-4-1, 3 KO's) in the junior welterweight main event. Official scores were 79-71 and 79-72 twice.
Bracero dazed Buterbaugh with a counter left hook in round one. Next, Bracero hammered him with a clean right to the face. Yet, Buterbaugh never took a backward step and pressed the action all night.
In round two, Buterbaugh suffered a small cut under his left eye and a large bruise under his right eye. Bracero used his highly accurate punching, superior ring generalship and stinging left jab to dictate the pace from that point. Bracero also employed many angles to frustrate an aggressive Buterbaugh.
Once Bracero found his range and got in his comfort zone, Buterbaugh could not land enough punches in succession to hurt him. Bracero's left jab was the real key in keeping the Denver, Colorado native off-balanced. The jab allowed Bracero to get his punches off first, while the constant lateral movement around the ring minimized the likelihood of Buterbaugh landing effective combinations.
By the final round, Bracero did absorb some punishment, and was bleeding under both eyes. Buterbaugh continued to charge him, but Bracero was much busier and kept landing the cleaner punches. 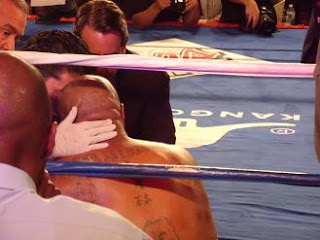 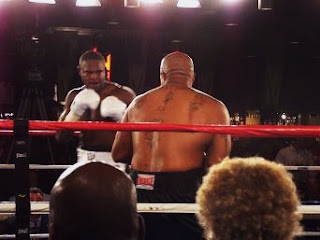 HAMER DESTROYS NELSON
In the co-main event, Tor Hamer (12-1, 9 KO's) bounced back from his first professional loss, stopping veteran Terrell Nelson (8-11, 5 KO's) in the first round of a heavyweight battle. Official time of the stoppage was 2:11.
Hamer scored three knockdowns en route to victory. First, Hamer floored Nelson with left uppercut - right hand combination. After that, Hamer sent Nelson into the ropes and onto the canvas when he landed a flush right hand. Finally, another right hand left Nelson on the floor and unable to continue.
Following the bout, Hamer called out Kelvin Price, who defeated him by a six-round split decision in May.
"When a fighter loses before he gets big fights on television, it's hard to get a contract to fight again," claimed Hamer.
Hamer put on a notable performance tonight, and he could get his wish in the near future. 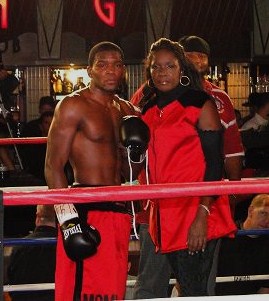 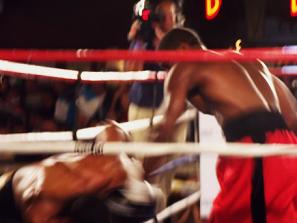 DOUGLIN VICTORIOUS AGAIN
Junior middleweight sensation Denis "Momma's Boy" Douglin (11-0, 7 KO's) stopped Orphius Waite at 2:10 of the first round. Thirty-five seconds into the bout, Douglin hurt Waite terribly with a sharp, straight left hand to the head. Douglin immediately capitalized on his momentum, pummeling Waite until the bout was halted.
"I wanted to attack the body more," said Douglin. "I was head-hunting after I hurt him."
Douglin added, "I'm not the hardest hitter, so I like to work on volume punching. I just want to let my hands go." 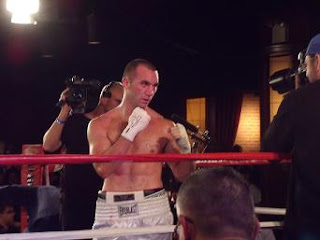 MONAGHAN WINS MAJORITY DECISION
Seanie Monaghan (3-0, 2 KO's) defeated Borngod Washington (0-6) by a four-round majority decision in a light heavyweight clash. Official scores were 38-38, 39-37 and a very questionable 40-36 tally.
Washington fought much better than his winless record indicates, as he scored countless times to Monaghan's body and head with his right hand shots. Monaghan used lateral movement and a stinging left jab to keep Washington out of range. 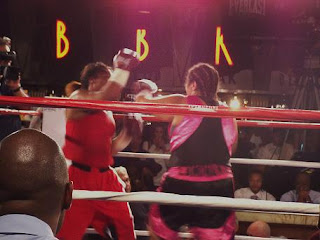 LAMONAKIS, STEVENSON DELIGHT CROWD
Sonya Lamonakis (2-0, 1 KO) won an action-packed, four-round unanimous decision against Alysia Williams-Stevenson (0-1), who was making her professional debut.
Lamonakis, who is a sixth-grade schoolteacher at Harlem's Family Academy, went toe-to-toe with Williams- Stevenson every minute of the bout to the crowd's pleasure, and proved to be the more polished fighter.
First, Lamonakis displayed a great deal of patience by catching and blocking many of Williams-Stevenson's punches on her arms. After Williams-Stevenson concluded unloading her shots, Lamonakis would swiftly counter with mostly rock-solid left hooks to Williams-Stevenson's head. As each round passed, Williams-Stevenson was visibly fatigued from the amount of punches she was unleashing, which enabled Lamonakis to place her shots more efficiently, and land the cleaner, crisper punches. 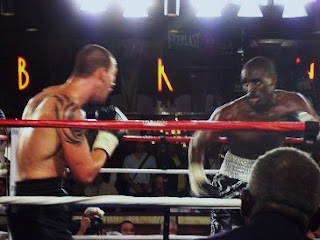 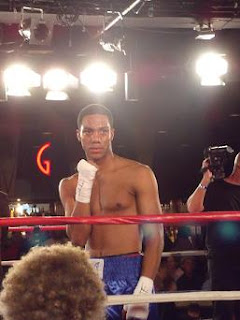 MARTINEZ KEEPS PERFECT RECORD
Steven Martinez (6-0, 6 KO's) kept his perfect record intact, knocking Cheyenne Ziegler (3-6-1, 2 KO's) out with a brutal left hook to the body at 1:07 of the 1st round. Ziegler simply could not match the speed and quickness of Martinez, who is managed by New York Giants running back, Brandon Jacobs. 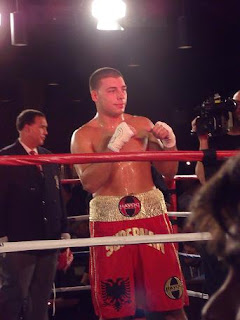 Bujaj, a Bronx, New York native, floored Brown with a right uppercut-overhand right combination in round one. Then, Bujaj scored with a multitude of powerful body shots, although he sustained an abrasion under his left eye during the round.

In round two, Bujaj hurt Brown badly after connecting with a right uppercut. In the final moments, Bujaj stunned Brown with a series of vicious left hooks to the body.
Posted by Michael Gerard Seiler at 3:54 AM