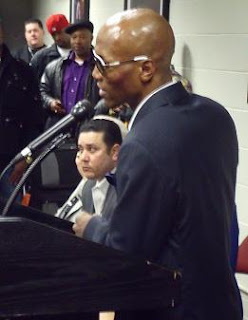 In rounds one and two, Judah used a great deal of lateral movement. He circled and fired his right jab to keep Matthysse from getting in close range. Yet, Matthysse was using quick feints and matching the tempo Judah was trying to set. Both fighters displayed a tremendous amount of respect for each other, and used extreme caution before exchanging punches.

In round four, Judah sustained a cut in the corner of his left eye. Judah landed a clean right hook in the fifth round, but Matthysse kept pursuing him. The 28-year-old stayed in front of Judah, never taking a backward step, shadowing his every movement.

In round six, Matthysse's effective aggression started to show its rewards. He closed the distance and struck Judah with straight rights. Then, he hammered Judah's body with a series of potent left hooks.

Judah landed a counter-straight left in the seventh round, but Matthysse kept unleashing his blazing right hand. In the eighth round, Judah took control again by landing well-timed, straight lefts in succession.

By the ninth round, Matthysse's confidence reached new heights. He was staggering Judah with multiple body and head shots.

In the tenth round, Matthysse floored Judah with a flush right hand. When Judah got up, he was met with a barrage of rights and left hooks from Matthysse. Then, Judah landed a sneaky left uppercut, but was holding Matthysse.

By the eleventh round, it was quite evident that Matthysse's punches were much crisper and harder than Judah's punches. Matthysse kept unloading a sequence of right hands. Judah opened up with some right hooks and straight lefts, but got in trouble on the ropes.

In the twelfth round, the cut on Judah's left eye was bleeding. Once again, Matthysse kept charging Judah and unleashed sharp, accurate right hands and left hooks. Judah answered with a string of straight lefts.

Matthysse was unable to finish Judah due to Judah's ring intelligence and supreme conditioning. Judah keenly understood when to hold and when to box after he got into some trouble in the later rounds.

After the fight, Matthysse was adamant that he should have been victorious. 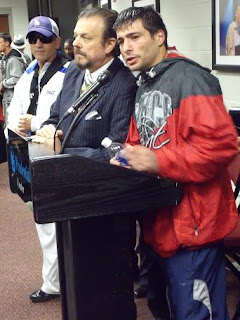 Judah completely disagreed with Matthysse's assessment of the fight, but did acknowledge the toughness and skills Matthysse displayed.

"You can't win four or five rounds of a fight and say you've won a whole fight," claimed Judah. "He couldn't do anything to me at the beginning of the fight."

Judah added, "He is the strongest fighter I ever fought. It felt like he was punching with cinder blocks in his gloves." 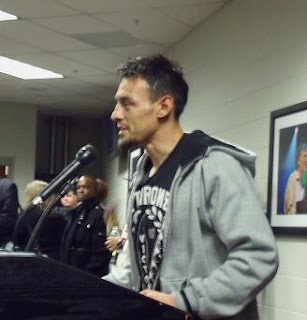 GUERRERO DOMINATES ESCOBEDO
Robert "The Ghost" Guerrero (28-1-1, 18 KO's) beat Vicente Escobedo (22-3, 14 KO's) convincingly by scores of 100-88, 98-90 and 96-92 to seize the vacant WBO Intercontinental Lightweight title.
Guerrero attacked Escobedo relentlessly from the beginning of the bout, landing numerous straight lefts and right hooks. Throughout the majority of the fight, Guerrero got his punches off before Escobedo.
In the first round, an accidental headbutt occurred that left Escobedo with a huge gash on the left side of his head. Escobedo was able to overcome the cut and close the gap in round two, however, Guerrero was still controlling the pace by using quick lateral movement and fast counter punches.
By the third round, the pace really started to pick up. Guerrero floored Escobedo with a left - right combination. Then, Guerrero landed a flush left uppercut. After that, Escobedo countered with a series of hard rights.
After a highly competitive fourth round, Escobedo slipped twice in the fifth and suffered a cut near his right eyebrow.
In round six, Guerrero floored Escobedo with a pulverizing left uppercut.
Guerrero started to establish complete control of this fierce battle, but he sustained an injury during the seventh round.
"I hurt my left hand and couldn't throw it much," declared Guerrero.
In round eight, Guerrero was unleashing his punches and simultaneously stepping on Escobedo's left foot with his right foot, stopping Escobedo from pivoting and countering. Guerrero increased his attack in the closing moments of the round.
Guerrero and Escobedo exchanged furiously in round nine, but Guerrero possessed a little more power behind his punches and got the better of the exchanges. Escobedo kept charging forward, scoring with a short right hand. Guerrero sustained a cut on his left forehead.
Bleeding from the corner of his right eye and left side of his head, Escobedo struck Guerrero with some ferocious body shots. Guerrero, who was bleeding himself under his right eye, kept countering quickly until the fight ended.
After the fight, Guerrero acknowledged that Escobedo was a warrior.
"He was coming to fight," said Guerrero. "He came well-prepared, but he didn't hurt me at all."
ALI WINS AGAIN
Brooklyn, New York's Sadam Ali (10-0, 6 KO's) continues to improve with each fight, winning by a second round technical knockout against Gary Bergeron (12-7, 7 KO's) in a welterweight contest. Time of the stoppage was 2:17.

Ali floored Bergeron in the opening moments with a sweeping left hook to the head. Next, Bergeron covered up, while Ali assaulted his body with a barrage of punches.

Bergeron started round two by landing a left hook, however, Ali countered by unloading a devastating overhand right. Then, Ali opened up his arsenal, throwing and landing a series of uppercuts. After a left uppercut dropped Bergeron, Ali struck him with a right - left hook combination. While Bergeron was on the ropes, referee Randy Neumann halted the action. 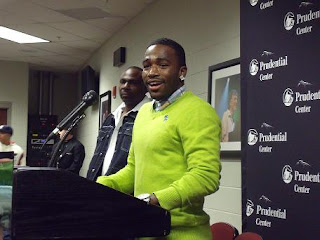 Lightweight sensation Adrien "The Problem" Broner (18-0, 15 KO's) continued his winning ways, terminating Ilido Julio (40-20-1, 35 KO's) at 1:34 of the first round. Broner, a Cincinnati, Ohio native, dropped Julio with a quick left - right combination. After that, Broner floored Julio again with a rock-solid right hand. Julio got up, but displayed unsteady legs and the bout was immediately stopped.

"I thought this kid would have given me at least four rounds, but he made a lot of mistakes," stated Broner at the post-fight press conference.


BROOKS OVERWHELMS HILL
Long Island, N.Y. native Mike Brooks (3-0, 1 KO) captured a four-round, unanimous decision victory over Kywayne Hill (1-6, 1 KO) in a junior welterweight bout. Brooks, a southpaw, stalked Hill and staggered him repeatedly with an arsenal of straight lefts to the body and head throughout the contest. All three judges scored the fight 40-36 for Brooks.


LUCKEY OVERCOMES ADVERSITY
Junior lightweight Tyrone Luckey (2-0, 2 KO's) recovered from an early first round knockdown to stop Alex Montes (1-2) at 2:55 of the third round.

Montes floored the Middletown, N.J. native with a blazing left hook in the early moments of round one. However, Luckey finished the round strong, scoring with his own left hooks in very fast-paced round.

In round two, Luckey dropped Montes with a straight left. Next, Luckey floored Montes again after he threw a swift left hook that landed on top of Montes' head.

Luckey sent Montes to the canvas a third time when he connected with consecutive left hooks to the head. Finally, with Montes' back against the ropes, Luckey hurt him with another left hook that prompted the bout to be halted.


PEREZ DESTROYS HERRERA
Lightweight prospect Mike Perez (10-0-1, 5 KO's) stopped Hevinson Herrera (14-7-1, 12 KO's) at 1:02 of round one. First, Perez wobbled Herrera with a powerful left hook to the head. After that, Perez dropped him with a double left hook combination to the body and head.

Butler tried to establish his left jab early in round one, but Zewski hurt him with multiple body shots and was picking his spots efficiently.

Zewski continued scoring with the left hook in round two, however, Butler struck him with his left hook, which landed extremely low.

In round three, Butler connected with an overhand right, although he lacked the power to hurt Zewski. Zewski was strong, durable and possessed a little more pop on his punches. Zewski never retreated, and kept pressing the action throughout the entire fight.

Zewski peppered Butler with a series of rights and lefts in the fourth round. Then, Zewski followed up on his flurry by landing a sharp right uppercut that momentarily stunned Butler. Butler continued to fight aggressively until the final bell.