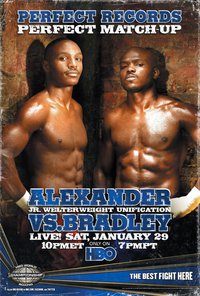 For a brief time, Devon Alexander and Timothy Bradley's professional boxing careers stood promisingly side-by-side. But, by the end of the night at the Silverdome in Pontiac, Michigan, their stature in the highly competitive junior welterweight division were quite different, resembling two elevators that had traveled in vastly opposite directions.

Timothy Bradley (27-0, 11 KO's) unified the WBC/WBO Junior Welterweight titles, capturing a ten-round technical decision victory over Devon Alexander (21-1, 13 KO's). The fight went to the scorecards after referee Frank Garza, on the advice of the ringside physician, deemed Alexander unable to continue due to an accidental clash of heads. Official scores were 96-95, 97-93 and 98-93 all in favor of Bradley.

As round one began, Bradley, 27, intensely brought the fight to the 23-year-old Alexander, who circled to his left and looked for openings.

In round two, Bradley charged Alexander when he saw a gap within Alexander's stance. Alexander seemed confused once Bradley got into close range, and looked to land sharp counters immediately. With Bradley momentarily off-balanced, Alexander caught him with a well-timed right hook.

Bradley landed a huge left - right combination in the early moments of round three. After that, Alexander landed a right hook. Then, Bradley responded with a hard body blow. During an exchange, Alexander sustained a cut right eye, which was clearly the result of an accidental headbutt. However, referee Frank Garza wrongly indicated the cut resulted from a punch.

Both men fought sloppy in round four, winging wide shots and clinching. Still, Bradley was putting more 'pop' into his punches.

After Bradley connected with a right to the body in the fifth round, Alexander quickly countered with a straight left. As Bradley became more threatening, Alexander unleashed a higher punch output.

In round six, Bradley landed a flush right hand on Alexander's face, but the St. Louis native absorbed the punch exceptionally well. Afterward, Alexander dictated the momentum by outworking Bradley behind a large volume of punches.

Bradley dominated the first minute of the seventh round, although Alexander controlled the pace in the middle of the round. Alexander established his range, firing a series of right hooks and straight lefts. Both men exchanged blows at a furious pace the last 45 seconds of the round.

Alexander landed a razor-sharp left uppercut in the ninth round, but Bradley countered instantly with swift right hand shots.

The final headbutt of the fight took place in the tenth round, which left Alexander in excruciating pain. Bradley moved into close range, appearing to throw a right, but the left side of his head collided ferociously with the left side of Alexander's head. While the ringside doctor conducted his examination of Alexander in the corner, Alexander complained of a burning sensation. This headbutt did not open a cut on Alexander's face or head, however, Bradley displayed a minor cut on the corner of his left eye in his post-fight interview with HBO's Larry Merchant.

At times, Alexander seemed hesitant to mix it up, waiting on Bradley to make a mistake. Bradley, on the other hand, forced the action the entire fight, showing the hard-nosed, courageous effort fight fans have grown accustomed to seeing from him.

There is a rematch clause in their contract, and it seems Alexander is interested in exercising the option.
Posted by Michael Gerard Seiler at 12:36 AM