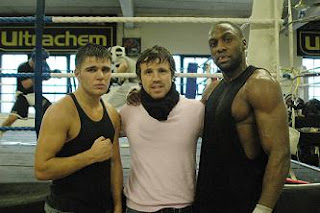 During his illustrious career Graham won virtually every domestic title going, including the Southern Area, British, Commonwealth and of course the WBU World title. Whilst the later may have been Graham’s crowning glory it was his next fight, against Michael ‘The Great’ Katsides for the interim WBO belt, that Graham is most fondly remembered for.

Graham, always a crowd favourite due to his ever gutsy performances, showed he had the heart the size of a Lion’s after going to war with Katsides right from the opening bell. Graham was sent to canvas twice in the final 30 seconds of first round but on both occasions was back on his feet to resume the toe-to-toe punch fest.

Round two was more of the same, again Graham was sent to the canvas but as before Graham was back on his feet quickly. Some twenty seconds or so later Graham’s trainer Johnny Eames threw the towel into the ring as Graham, with his back against the ropes, absorbed massive salvo after massive salvo from Katsides.

Referee Mickey Vann picked the towel up and threw it back, just seconds later it was Katsides turn to take the count after Graham lets rip with a massive right hand which turned the Australian’s legs to jelly. Following the count Graham marched forward and pressured Katsides, who was clearly was in trouble, for the rest of the round.

Round three see Graham revert to boxing rather than locking horns with Katsides, following a series of lows blows from Katsides, which eventually cost the Aussie a point deduction, Graham easily secured the round by a clear 10-8 points margin.

Round four was just plain brutal, Katsides stepped up his attack but Graham once again showed his resolve by letting rip with massive rights and combinations of equal venom.

Graham again reverted to his boxing in the fifth round and put on a magnificent performance. In the final twenty seconds of the round Katsides backed Graham into a corner and started to let rip with bomb after bomb, Graham ducked and weaved before letting rip with massive right hands of his own.

Unfortunately for Graham, even after putting on such a solid performance in the fifth, his team felt he was taking far too many shots and retired him in the corner.

Graham may have lost the fight but he won the hearts and minds of boxing fans the world over with his gutsy never say die performance that night. The fight quite rightly was declared the ‘Fight of the Year’.

When Graham fought you were guaranteed value for your money and now he has turned his attention to promoting nothing has changed, his ‘Capital Punishment’ event which is headlined by the much anticipated Southern Area Super Middleweight title fight between Paul Morby and Daniel ‘The Slick’ Cadman and is supported by a top class undercard.

Steve is the voice of British Boxing and his shows are always entertaining. I’m really looking forward to being on his show this Thursday.”

Final word has to go to the show’s host Steve Bunce who said, “In addition to Graham I’ve got Willie Casey on the show, Jimmy Batten from the 70s and 80s and the last interview with Gary Mason.

It's the original and still the best - it covers the lot: Million-pound fights, down and out boxers, new promoters, old promoters, cranks, unknown amateurs, fruitcakes, world champions, legends, lunatics and the best from boxing every single week. It has broadcast every single Thursday since Jan 7th 2010!"

Tickets for the Graham Earl promoted CAPITAL PUNISHMENT at York Hall, Bethnal Green in London on Saturday 22nd January 2011 are priced £35 (unreserved) and £50 (ringside) and are available on-line now at www.tkoboxoffice.com - or for further information call 07960 850645
Posted by Michael Gerard Seiler at 4:18 PM