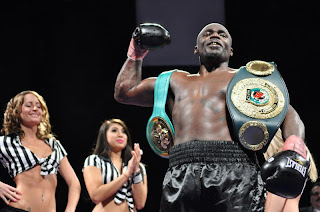 Photo Credit: Sara Rivest
INDIANAPOLIS, INDIANA (February 25, 2011)—With very few top American Heavyweights in recent years, a new name is ready to crash the party and influx some life into what many boxing insiders say is the lowest time in American Heavyweight boxing.

“I am still absorbing that I have these belts”, said Lawrence, who now sports a record of 14-2-2 with nine knockouts.

“I think because I will fight anyone that I should be recognized more and that motivates me.”

“I was hurt that going into my last bout that Estrada was getting all the recognition. All he ever does was handpick his opponents and I had to earn my spot”

People who knew Lawrence before the Estrada fight know all about his gift of gab and he even knows that is still more to learn with each fight.

Lawrence doesn’t believe that being thirty-five years old is a deterrent on still being able to rise to the top of the Heavyweight division.

“If I started my career sooner, I would be way ahead but I am always in shape as I was back in the gym just four days after the Estrada fight working on my cardio”

Lawrence looks to represent his home state of Indiana and bring back the Heavyweight championship to the Hoosier state.

“In me, Indiana has a true champion. I am doing as well as the Colts, The WNBA team here and all the sports. I want to represent Indiana to the fullest. Lamon Brewster was from here but he has been in California for some time so I believe that I am the man here in Indiana and soon the world will know that”

Franklin Lawrence is promoted by Fisticuffs Promotions and his next bout will be announced shortly.
Posted by Michael Gerard Seiler at 12:47 PM