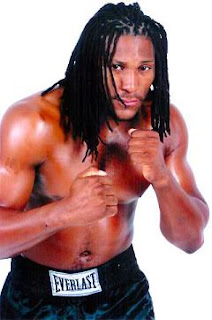 FEBRUARY 22, 2011 - Fast rising and exciting heavyweight prospect, Joe "The Future" Hanks (15-0, 10KO's) has signed an exclusive long-term agreement with Joe DeGuardia's Star Boxing.  The New Jersey native Hanks, who made his pro-debut on a DeGuardia promoted card, now looks to continue his march towards a heavyweight world title under the Star banner.
"Ever since Joe made his pro-debut with us I have kept a close eye on him," stated DeGuardia.  "Right from the start you could see that he had a lot of raw talent and power, to go with his great size.   Joe has grown and improved from each fight, and we feel that he will only continue to do so as begins to make the transition from hot prospect, to a true top-ten contender."
Hanks agent Michael Borao agrees, "I see Joe distinguishing himself from all other heavyweight prospects and breaking into the world ratings within the next 12-18 months.  We are happy to have Star Boxing on board, helping Joe on his journey to a world title."
After having his first three fights as a pro, two of which were on Star Boxing cards, in New York, Hanks took his show out West and has recorded his last twelve victories while fighting in the state of California.  Now DeGuardia, who regularly stages events throughout New York, New Jersey, and Connecticut, is looking to further develop Hanks home fan-base back on the East Coast.
"Joe is from New Jersey, but his last twelve fights have all been on the West Coast.  Now that we have Joe not only are we looking to develop him into a future champion, but we also want to begin broadening his fan base back here in the tri-state area.  We are really excited to be adding Joe, who is one of the top prospects in the area, to our roster."
Look for an announcement as to the date when Hanks will be making his Star Boxing debut very soon.
Posted by Michael Gerard Seiler at 11:05 AM