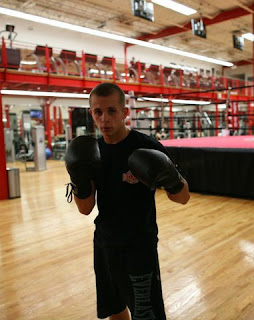 Kamil Laszczyk
NEWARK, NJ (February 7, 2011) - Polish boxers Kamil Laszczyk and Rafael Jastrzebski have been added to "Brick City Brawl" on February 19 at Essex County College, which will be promoted by Prize Fight and Global Boxing Promotions.

Laszczyk, 19, is from Wroclaw, Poland and won six national championships back home during a 110-7 amateur career. Laszczyk was training previously with Polish super middleweight champion Piotr Wilczewski but will now work with Aroz "Terrific" Gist.

Making his pro debut, Laszczyk is the first product of the Global Boxing Foundation, which brings young amateur boxers from Poland to America to help them achieve their boxing dreams. As a featherweight, Laszczyk needed all the help he could get.

"There is a very limited market for smaller weight fighters in Europe," says Mariusz Kolodziej, President of Global Boxing Promotions. "In the next couple of months, we want to adjust him to the American style of boxing and match him with the right fights to make him a world-class professional."

Jastrzebski, 29, of Bydgoszcz, Poland competes in the super-middleweight division. His record of 3-6-1 (1 KO) is deceiving, as he was the victim of flagrant mismanagement early in his career. Often times the naive Jastrzebski was placed in cruiserweight (200 pounds) matches to build up the records of others, where he was outweighed by 10 pounds or more.

Now based in Atlantic City, NJ and trained by Bill Johnson and conditioning coach Sean Sutton, Jastrzebski is getting a second chance.

"I'm willing to give him another chance in life because he was misrepresented in his career," says Kolodziej. "It's more than just sports or money, this is his life. He came to America to be a champion and we want to give him every chance. I see great potential in him."

Since teaming up with countryman and unbeaten middleweight Przemek "Patrick" Majewski, Jastrzebski is 3-0 with 1 knockout.

Both men will compete in four round bouts against opponents to be named later.

For more information on Laszczyk, Jastrzebski or any other Global Boxing fighters, visit www.globalboxing.com.

Doors open at 7PM, first fight is at 8PM.
Posted by Michael Gerard Seiler at 10:26 PM