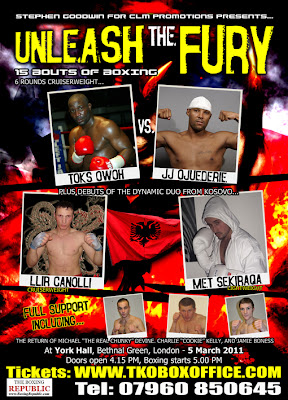 It was in 2000, after amassing a 16-1 record littered with TKO stoppages, that Toks earned the right to challenge American Glen ‘Road Warrior’ Johnson for the IBF Inter-Continental Super Middleweight Crown. Toks’ dream of a World title shot came to an abrupt end when he was stopped in the sixth round.

Johnson’s unexpected victory catapulted him to World fame and embarked him on a journey that see him move to Light Heavyweight and capture the WBO Inter-Continental light heavyweight title, before securing IBA, IBO and IBF Light Heavyweight World crowns.

Johnson became a super star and battled, and beat, such notables as Clinton Woods Antonio Tarver, Roy Jones, Daniel Judah and Yusaf Mack, whilst Toks on the other hand was left in the wilderness. No fights materialised for almost two years and when they did he had more or less been consigned to ‘journeyman’ status.

Toks did win the first of these bouts, against Mondli Mbonambi in January 2002, but then followed three bad point losses, against Valery Odin, Eric Teymour and Ryan Walls. In the final fight of his first campaign, a four rounder against Paul Bonson at the Equinox Nightclub in London, Toks secured the win and then called it a day.

In October ‘10, following a five year sabbatical, Toks made his long overdue return to the ring with a warm-up four rounder against Hastings Rasani. A tidy 39-37 points victory convinced Toks that he still had what it takes and the search for a promoter began.

His search didn’t take that long and in December 2010 promoter Steve Goodwin signed Toks. The bout against JJ Ojuederie on March 5th will be Toks' debut under the Goodwin Promotions banner and his first step back towards the top flight.

This is my second fight back since 2005, I was # 3 in the world at one time in my career and I think I can get myself back there. I know what I can do.

I’ve been in there with some of the best fighters in the world, I’ve learned from being in with the best. JJ’s not in my league, just look at my record JJ’s never fight anyone like I fight.

Three Ultrachem TKO gym mates of Daryl Setterfield are also on the show, Light Heavyweight Joel ‘El Toro’ McIntyre, Light Middleweights Nathan Weise and Brett O’Callaghan, all against yet to be named opponents.

Making his first outing as a professional is Highbury Super Featherweight Charlie Kelly who is set to face the highly experienced Birmingham battler Anthony ‘Spanner’ Hanna.

Tickets for Unleash The Fury at the York Hall, Bethnal Green, London on Saturday 5th March 2011 are on sale now - priced £35 (Unreserved) or £60 (Ringside).