Better Laight Than Never For Boylan 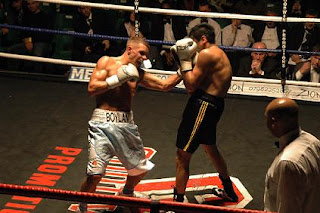 Carshalton’s Ricky Boylan returned to the Ultrachem TKO Gym in Canning Town this week in order to prepare for his upcoming showdown against Kristian Laight, on the Steve Goodwin promoted ‘Essex Eruption’ quadruple headline show at the Goresbrook Leisure Centre in Dagenham, Essex on Saturday 19th March 2011.

The ‘Essex Eruption’ event should have been the second outing of the year for the former London ABA finalist, who had been due to fight Craig Dyer at York Hall on the 20th February but due to a family crisis had to withdraw.

Following a training session at the Ultrachem TKO Boxing Gym in Canning Town Ricky explained why he withdrew from the February show, “Basically I had a little niggling injury I was working through in the gym but then my Dad had a stroke that week, so I didn’t want to get in the ring in the wrong frame of mind and then get a silly loss, it’s not worth it, so Johnny (Eames) pulled me out.

My Dad’s getting on, he’s doing well. He’s getting much better.”

Ricky then went on to talk about his upcoming fight with Kristian Laight on March 19th, “I’ve been training hard, I come back properly on Monday, I’ve still been ticking over but from Monday I’ve been doing it one hundred percent.

Kristian Laight, he’s massive, truly massive. He’s a tall southpaw so I’ll have to put the pressure on, let plenty of right hands go and hopefully come away with another win.

I always get good sparring here, but for this fight there’s a couple of people really for it, you know tall southpaws. There’s a guy from my area called Tony Owen. I’ve done a few rounds with him recently. Probably do some rounds with Bradley Skeete. There’s Freddie Turner up here obviously, just whoever Johnny thinks will give me the right sparring for the fight really. Whoever he gets me to spar I’ll be happy to spar them.

This should be my fourth fight but it’s going to be the second. To be honest the first one on the George Groves show that wasn’t anyone's fault, that was just Hayemaker boxing. The second one I boxed on that one, and won. The third one, well that couldn’t be helped, because of my Dad. Hopefully the fourth one on the the 19th will be OK and be my second actual fight.”

In addition to Ricky Boylan versus Kristian Laight the undercard of the quadruple headlined super show includes a whole host local talent including Ricky’s Ultrachem TKO team mates Daniel Herdman, who faces Kevin McCauley, and the highly rated unbeaten Featherweight prospect ‘Saint’ George Jupp against a yet to be named opponent.

Middleweight Kris Agyei-Dua and Danny Brown will be making their second outing in a Month, after both securing wins on their debuts at York Hall on February 20th.

Further fights are expected to be announced shortly to bring the ‘Essex Eruption’ card to fourteen bouts.

Tickets for ESSEX ERUPTION at the Goresbrook Leisure Centre in Dagenham, Essex on Saturday 19th March 2011 are priced £35 (Unreserved) or £60 (Ringside) and on sale NOW.