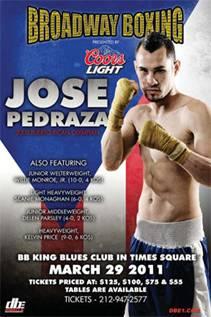 Junior lightweight Jose Pedraza (2-0, 2 KO's) made a successful U.S.A. professional debut at the BB King Blues Club and Grill, stopping Corben Page (1-2) at 2:25 of the first round.

Pedraza displayed excellent balance and coordination, as well as an abundance of future-star qualities. He overwhelmed Page with his hand speed and power, dropping the Oregon native with a quick right-hand shot in the beginning of the round. Page got up, but was met with blistering combinations from the Puerto Rican sensation. Once again, Pedraza put Page on the canvas with a short right cross. At this point, Page's face was badly bruised and he was trapped in the corner. Referee Joe Cusano finally stopped the bout after Pedraza unloaded another barrage of punches to Page's head and body.

Monroe, a southpaw, appeared to win the first two rounds using his right jab and superior lateral movement. However, Boone came on strong in the third round, connecting with an overhand right and many shots to the body. At times, Monroe's back was against the ropes, as Boone smothered his punches.

Monroe kept Boone away in round four behind his jab and slick movement, although he had trouble in round five. Boone stalked him all over the ring, landing a left hook that floored Monroe, but it was ruled a slip by the referee. Boone aggressively attacked and scored with shots to Monroe's body.

In the sixth round, Boone applied heavy pressure, but Monroe kept him turning.

Boone did very well in the seventh round, as Monroe stood in front of him too long at times without unleashing many punches.

Finally, Boone caught Monroe in the eighth round with a firm right-hand shot, sending the Rochester, New York native to the canvas.

Although the official scores were one-sided, Monaghan went blow-for-blow with Glenn throughout the entire bout. Monaghan showed tremendous endurance, and his large volume of body punching slowly wore Glenn down.

Super middleweight prospect Travis Peterkin of Brooklyn, NY (2-0, 2 KO's) stopped Abdellah Smith (1-2, 1 KO) of Queens, NY at 2:33 of round one. Peterkin, a southpaw, hurt Smith with several straight-left bombs and vicious right hooks until the bout was halted.

Tyson was very competitive in round one, but Burrell landed multiple right crosses, leaving Tyson slightly staggering, as he walked back to his corner at the end of the round.

In round two, Burrell controlled the action with his devastating right-hand punches, although Tyson fought better in the middle of the round, scoring with fierce left uppercuts to Burrell's body.

It was quite apparent by round three that Burrell was the sharper puncher, and his shots were inflicting a lot of damage. Yet, Tyson fought well in the fourth round. Tyson cut Burrell's right eye with a series of straight lefts, and totally outworked him in the final round, but came up short on the judges' scorecards.

Parsley, who prefers counter-punching over pressing his opponents, was the aggressor during the first two rounds. He successfully landed his right-hand shots during the first six minutes of action.

In round three, Lopez tried to catch Parsley with a lunging left hand, but missed widely. Suddenly, Lopez stepped up the pace. Parsley responded by tagging Lopez with a sharp left jab, and landing a thunderous left hook to the body.

Lopez got to Parsley in round four, exploding with a multitude of punches. Lopez, a southpaw, connected with several straight lefts and right hooks to Parsley's body.

Parsley controlled range in round five, although Lopez came on with wide punches toward the end of the round.

Once again, Lopez charged forward in round six, but was hesitant at times to let his hands go due to Parsley's hand speed.

DuLuc, a Dorchester, Massachusetts native, sent Alarcon down in the first round with a thunderous right cross. From there, he dominated the round with right crosses and left hooks in succession.

DuLuc punished Alarcon with body shots in round two, and used lateral movement to frustrate him.