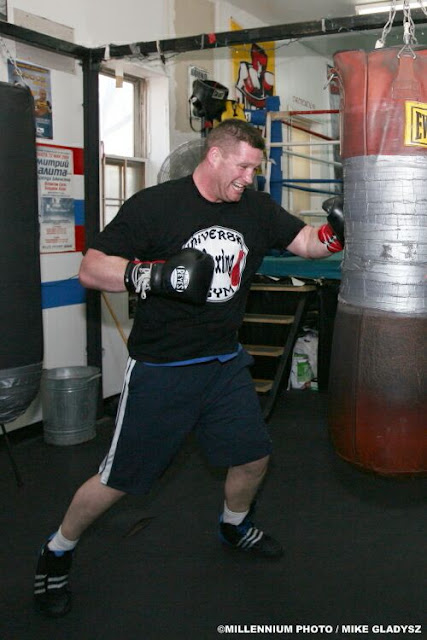 Kevin McBride held a media workout today in preparation for his April 9th fight against Tomasz Adamek. This is what he had to say:

"I've been doing what I have to do to get fit for 12 rds. I have a good team behind me. I want to show the world that I'm a contender. When I hit him on the chin he'll think the whole of Ireland was doing it. The best thing about it is the Polish People will be there to witness it!"

"I'm expecting a good fight. It's going to be exciting; the Polish and the Irish is a great combination. I'd love to see a few Irish there too, but a hostile crowd won't affect me at all. It was a hostile crowd when I fought Mike Tyson. With Tyson nobody gave me a chance, but I proved different. That's what I plan to do on the 9th of April."

"This is my last chance to show the world that I am a contender and I'll follow my dream to be the first Irish born Heavyweight Champion. I have a good team with manager Jerry Quinn & trainers Goody Petronella who will be in my corner with Nirmal Lorick."

"Adamek was a great champion in light heavyweight and cruiserweight, but this is the heavyweight division. I know that one punch can do the job."

"There's only two ways that I could go out of the ring: the winner; or on a stretcher. There is only one man who could win that night and that is Kevin McBride."

The Adamek - McBride fight will be the main event on the April 9th card at Newark's Prudential Center. The card is presented by Main Events & Ziggy Promotions. Doors open at 6:45pm, first fight 7:00pm.

Adamek vs. McBride will be distributed in the United States and Canada by Integrated Sports Media for live viewing at 9 PM/ET - 6 PM/PT on both cable and satellite pay-per-view via iN Demand, DIRECTV, DISH Network and Avail-TVN and Canada via Viewer's Choice, Bell TV and Shaw Cable PPV for a suggested retail price of only $29.95