Algieri came out fast and hard in the first, setting the pace from the opening bell. Algieri worked behind a stiff jab and scored well with both hands. 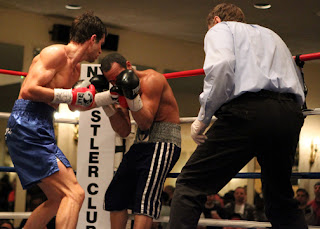 In the fourth another left hook to the body sent Edmonds to the ropes and Algieri was immediately all over him, landing a vicious flurry that sent Edmonds down for the first time in the fight. Edmonds beat the count but was visibly hurt. As soon as the action resumed Algieri jumped all over him, landing shot after shot. With Edmonds covering, the referee mercifully called a halt to the contest. Official time of the stoppage was 2:24 of the fourth round. With the highly impressive performance Algieri improved to 11-0, 6KO's and looks to be well on his way towards becoming a serious contender in the loaded jr. welterweight division. 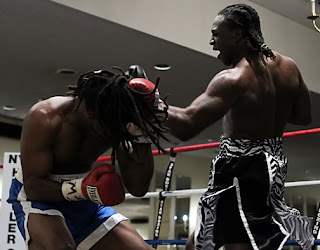 In the co-feature bout of the evening, former four-time national champion, and 2008 U.S. Olympic Team Alternate, Adam "Showtime" Willett won a dominate four round unanimous decision over Sharieff Hayes in their cruiserweight contest. It was the first time back in the ring for Willett, who nearly lost his life last year when he was shot in the chest.

Willett didn't show much ring rust as he continously peppered Hayes with combinations to both the body and head throughout the bout.  Hayes hung tough but wasn't able to put together much offense against the quick handed Willett.  In the end Willett pitched a shutout, winning by scores of 40-36 on all three judges scorecards improving his record to 2-1 as a pro.

UNDERCARD ACTION
In the opening bout of the night, Polish amateur star, Kamil Laszczyk scored a spectacular 2nd round knockout over Luquan Lewis. After a dominate first round, Laszczyk landed a tremendous overhand right near the end of the second that sent Lewis through the ropes completely unconscious. Lewis's body lay draped over the 2nd rope until ringside physicians came to his aid and laid him back in the ring. Very impressive performance for Laszczyk who was accompanied into the ring by top-rated Polish jr. middleweight contender Pawel Wolak. Laszczyk improved to 2-0, 2KO's.