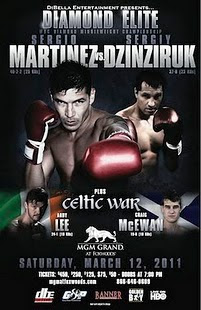 "No fight is an easy fight," stated Martinez, who spoke briefly at the post-fight press conference before heading to get a few stitches at a nearby hospital. "I want to continue to fight the best."

Martinez was asked by the press to call someone out, and he did not hesitate to mention a name. 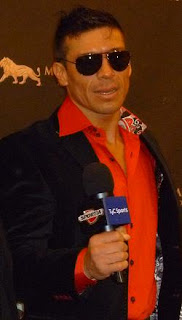 Lou Dibella, who promotes Martinez, is willing to match him with anyone in the sport after his outstanding performance against Dzinziruk.

"If it's my guess, Bob Arum will not make a fight between Sergio and Cotto," announced Dibella. "Maybe, Cotto is man enough to ask Bob Arum to make the fight? Bob Arum is not making any fight with his guys against other people. He seems to be lining up bum after bum to face Manny Pacquiao and Miguel Cotto."

Dibella added, "I want the biggest fight we can get. Martinez is the best fighter in the world."

Martinez opened the first round by splitting the defensive guard of Dzinziruk with a precise left uppercut. From there, he got his punches off first and displayed a distinct advantage in hand speed over Dzinziruk.

In round two, Dzinziruk scored with an overhand left behind a double-right jab. However, Martinez proved to be faster, scoring with a right hook to Dzinziruk's head. Toward the end of the round, Martinez landed a multitude of body shots. Dzinziruk simply could not catch Martinez when he moved in and out.

Martinez completely out-jabbed Dzinziruk throughout round three, repeatedly peppering him in the face with his right hand.

In round four, Martinez' quick right jab - left cross combination floored Dzinziruk. Undoubtedly, Martinez found his range, and never lost it. Later, Dzinziruk struck Martinez low and connected with a solid left-hand shot to the head, but Martinez shook off the effects.

During round five, Martinez controlled the tempo for the first minute. Then, Dzinziruk came on in the second half of the round until he was dropped again by consecutive left hands from Martinez.

Martinez continued to utilize his right jab successfully in rounds six and seven, throwing and landing punishing left crosses off it.

In round eight, Martinez sent Dzinziruk crashing to the canvas yet again after landing a piercing overhand left. When Dzinziruk attempted to rise, he fell flat on his face. Yet, he recovered momentarily until Martinez landed back-to-back left hands that sent him down for a second time in the round. Finally, Martinez put Dzinziruk away when he connected with a sweeping right hook to his head, as referee Arthur Mercante, Jr. halted the action.


LEE TRIUMPHS OVER McEWAN
In front of a very boisterous crowd emphatically cheering his name, middleweight contender Andy Lee (25-1, 19 KO's) scored a tenth-round technical knockout over Scotland's Craig McEwan (19-1, 10 KO's), who he also defeated in the amateur ranks. The official time of the knockout was :56.
"I was losing the fight in the last few rounds," exclaimed Lee. "But, I saw him getting tired and I saw my punches having a good effect on him."
Lee started the fight well, landing two rock-solid right hooks to McEwan's head early in round one. Those right hooks really set the tone for the 26-year-old from Limerick, Ireland, as he hardly missed with that punch throughout the bout. However, the lack of a steady right jab from Lee almost cost him the fight.
In round two, McEwan was able to get in close quarters and connect with damaging right hooks of his own. Then, a series of straight lefts sent Lee into the ropes as the bell rang to end the round.
Lee bounced back with a better third round, landing the right hook behind his jab more efficiently. McEwan seemed a little uncertain about letting his hands go. Again, McEwan had no answer for Lee's right hook, as he often got tagged with it.
Late in round four, McEwan, 28, jarred Lee with a barrage of punches.
McEwan aggressively attacked Lee's body in the fifth round. Lee briefly clinched after getting nailed by a right hook - straight left combination.
At times, Lee was getting out-boxed in the center of the ring during round six. Yet, Lee managed to come back strong in the following round.
In round seven, Lee struck McEwan with a devastating right hook he never saw coming.
Both fighters landed solid punches in round eight, which ended up being a close, well-contested round.
It turned out that Lee had a lot more left in the gas tank than McEwan during round nine. All of a sudden, Lee unleashed a smashing straight-left hand punch that dropped McEwan near the corner. With the crowd erupting, Lee could not finish him off.
In round ten, Lee caught McEwan once more with a straight left, which he followed with consecutive right hooks that left McEwan stunned. After that, Lee released an overhand left that found its mark and referee Steve Smoger stopped the fight.
McEwan showed a ton of heart, never quitting and battling Lee with every bit of energy he had in his body. On the other hand, Lee had a little bit more tenacity, displaying the resourcefulness and skill to come from behind in a fight. Lee also exhibited a granite-like chin, and the capability to land his right hook with regularity. Nevertheless, Lee still needs to work on jabbing consistently, as well as discharging his punches at the right time. 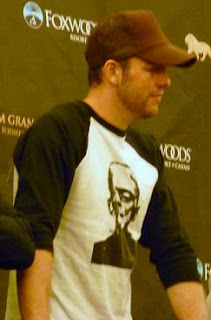 "Overall, I wasn't happy with my performance," claimed Lee at the post-fight press conference. "I hurt him early in the fight and I think that worked against me. In the middle rounds I thought I was losing the fight, so I said to myself, 'If I am going to lose, he's going to have to kill me.'"
FORTUNA SCORES ANOTHER DRAMATIC KNOCKOUT
20-year-old Javier "El Abejon" Fortuna (14-0, 11 KO's) scored another stimulating knockout, flattening Derrick "Dynamite" Wilson (8-2-2, 2 KO's) at 2:27 of round eight in a featherweight bout.
Fortuna, a southpaw, started trading bombs in the beginning of round one with the 22-year-old Wilson, who gave Fortuna a rough fight despite getting dropped several times.
In round two, Fortuna was much more patient, looking for openings to land a left-hand shot. Wilson did an efficient job of circling, and not engaging with the explosive Dominican.
Wilson started to push Fortuna back with a steady left jab in round three. However, Fortuna floored the Florida native with a destructive right hook to the head. Fortuna tried to take him out, but Wilson kept him turning and survived the round. Late in the round, Fortuna landed a vicious left uppercut that caused Wilson to clinch.
After Wilson landed a right cross - left hook combination, Fortuna carefully placed his shots during round four.
Fortuna fought mostly in spurts in round five, as he was being consistently out-boxed by Wilson. Then, Wilson snapped Fortuna's head back with a brutal right cross moments before the bell to close the round.
Still, Wilson lacked the power to keep Fortuna from coming at him energetically, and he paid the price for it in round six when Fortuna landed a massive counter-right hook to the head, dropping Wilson a second time in the bout. Wilson displayed minor bruising under his left eye.
Despite the two knockdowns, Wilson stayed in Fortuna's face throughout round seven, which would prove costly in the eighth round. Fortuna continued to look for that big punch to put Wilson away; He found it in round eight.
As he was slipping in the ring, Wilson got knocked down again after Fortuna landed a glancing right hook. Wilson was not badly harmed, and the action progressed. When Wilson attempted to connect with a left hook, Fortuna stepped into him, landing a crushing left-hand shot that left Wilson motionless on his back for approximately two minutes.
DULORME CLIMBING RANKINGS QUICKLY, STOPS VALDEZ IN 2ND ROUND
Welterweight prospect Thomas "The French" Dulorme (10-0, 9 KO's) scored a brilliant second-round technical knockout against Guillermo Valdez (12-3, 3 KO's). Dulorme, 21, hails from Carolina, Puerto Rico, and all his knockout victims have been stopped in two rounds or less.
In round one, Dulorme hurt Valdez with his sharp left jab. After that, a right cross - right uppercut combination from Dulorme almost put Valdez through the ropes.
Dulorme hammered Valdez with a thunderous right cross, followed by a flurry of punches until the bout was halted at 2:30 of round two.
Dulorme exhibits exceptional natural balance and adept hand speed. His overall coordination and talent is way above average for fighters at his current level. Dulorme is promoted by Gary Shaw.
OTHER BOUTS
36-year-old Sonya Lamonakis (4-0, 1 KO) captured a six-round unanimous decision over Tanzee Daniel (4-1, 1 KO) in a heavyweight slugfest. Steve Weisfeld scored the bout 58-56, while Julie Lederman and Glenn Feldman scored it 59-55. The referee was Joe Lupino. Lamonakis is a 4-time New York Golden Gloves champion.
Light heavyweight Seanie Monaghan (6-0, 4 KO's) defeated Billy "Steel" Cunningham (5-9, 4 KO's) by a four-round unanimous decision. Glen Feldman, Clark Sammartino and Don Ackerman all scored the fight 40-36. The referee was Dick Flaherty.
Monaghan hasn't fought an opponent with a winning record yet, but he looked much improved from his last outing, hurting Cunningham with hard, crisp body shots the entire fight.
Junior middleweight Abraham Lopez (2-1-1) beat Andrew "Drama" Jones (0-4-1) via four-round unanimous decision. Glenn Feldman and Steve Weisfeld gave scores of 39-37 to Lopez, while Julie Lederman scored the bout 40-36. The referee was Joe Lupino.
Jones had a great deal of trouble countering the barrage of punches from Lopez. In round four, Lopez really hurt Jones with his consistent, overwhelming body attack.
Posted by Michael Gerard Seiler at 8:00 PM