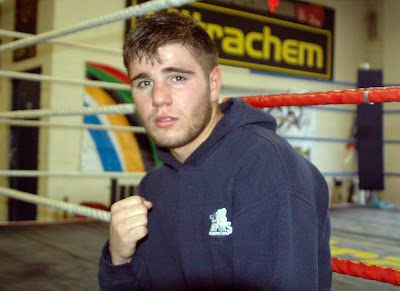 London - Wednesday, 23rd March 2011
Stevenage’s Terry Holmes is set to travel to Northern Ireland for the third fight of his fledgling professional career, where he will take part in former World champ, turned promoter, Graham Earl’s maiden Belfast event ‘Fists of Fury’ at the King’s Hall on Saturday 2nd April 2011.

19 year old Holmes is already earning a reputation as one of the toughest youngsters on the scene after his scintillating performances over Johnny Greaves, back in October, and more recently against Sutton’s Danny ‘Cassius’ Connor, on Graham Earl’s excellent ‘Capital Punishment’ event at York Hall in January.

Back in January Holmes started hard and fast, forcing Connor to use his jab to keep his raging bull attacks at bay. Holmes seemed content to throw bomb after bomb whenever he got in range.

Round two was more of the same, until around midway when one of Holmes’ bombs hit the target - hard. Feeling more confident Holmes went even more on the attack. Connor continued to use his jab to keep the terrier like Holmes at bay, however Holmes just wouldn’t back down.

Things settled down a bit in the third round and some good toe-to-toe action ensued. Holmes slowed things down a bit and instead of launching wild attacks started picking his punches. Connor was boxing well but the tide had turned firmly in favour of Holmes with his more controlled approach.

Round four was more of the same again and at one point looked like Holmes may have the stoppage he predicted after landing a big right before pouncing on Connor with a flurry of big shots. Connor weaved and ducked but with his back to the rope didn’t seem to have an escape route so let rip with a few of his own. This was enough for Holmes to take to the back foot. Connor pushed forward and let rip with a salvo of his own. The crowd were on their feet as the action flowed back and forth until the final bell rang and Holmes was declared victor by a 40-36 points margin.

I’m looking to improve and build on my last win. I think I went a little bit wild last time out, I wanted to beat him up because he kept saying he was going to knock me out and things like that.

I don’t think he hit me that much, it went well and now I’m looking forward to fighting in Belfast.

Graham hasn’t old me who I’m fighting yet, but I don’t care anyway I’m going for the win. I’ll go out there and do what you do and get another good win under the belt.

We’ve been training quite hard, sparring all day yesterday and the day before. Been going well they’re all good boxers, it’s been good sparring for me really. I just need to lose a little bit of weight now and then I’m ready.

It’ll be a good fight and a good win for me.”

Terry Holmes, against a yet to be named opponent, will feature on the undercard of Graham Earl’s ‘Fists of Fury’ at King’s Hall, Belfast on Saturday 2nd April 2011.

Headlining the show will be WBU Lightweight World Champion Willie Limond, against a yet to be named opponent.

Popular Middleweight prospect Joe ‘The Belfast Banger’ Hillerby is set for his home debut, against a yet to be named opponent, as are Ian Boyd and Michael McLaughlin who will be looking to get the first win under their belts in front of a home crowd.

Local lads Sean Montgomery, Paidrag McCrory, Mark Morris and Mark Ginley will all be making their pro debuts on the 2nd April.

Tickets for the Graham Earl Promoted ‘FISTS OF FURY’ event at the Nugent Hall, King’s Hall, Belfast on Saturday 2nd April 2011 are now on sale and priced £35 (Unreserved), £40 (Outer Ringside) or £50 (Ringside).