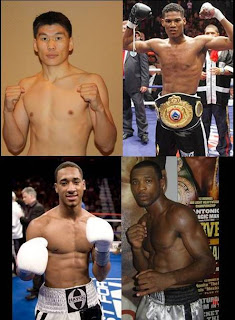 On Friday, April 22nd, Joe DeGuardia's Star Boxing returns to the Mohegan Sun in Uncasville, CT with an intriguing double-header on ESPN's "Friday Night Fights". Kicking off the telecast will be Providence Rhode Island's 2008 U.S. Olympian, Demetrius Andrade as he takes on his toughest opponent to date when he squares off against once beaten Omar Bell in an eight round jr. middleweight showdown. Then all-action, Bayan Jargal looks to make the leap into the mix of top 140 pounders when he takes on the "Khanqueror" Breidis Prescott in a ten round jr. welterweight contest.

"We are excited to be returning to Mohegan Sun, with what promises to be an exciting double-header," stated Joe DeGuardia, CEO of Star Boxing, and promoter of Jargal and Andrade. "At Star Boxing we always look to make the best possible fights for the fans, and we feel April 22nd will be no different. You have one of the hottest prospects in all of boxing opening up the show, and Jargal and Prescott are both all-action fighters which is sure to produce fireworks. We are also looking to to pack the undercard with exciting local talent that will make it an entertaining and exciting show from top to bottom."

"Friday Night Fights and Mohegan Sun go hand-in-hand when it comes to providing a memorable night of action and competition," said Tom Cantone, Vice President of Sports and Entertainment at Mohegan Sun. "The relationship we've sustained throughout the years has provided boxing fans with entertainment and allows the region's premiere fighters to showcase their talents."

Jargal (15-1-3, 10KO's) who represented his native Mongolia at the 2004 World Games, is coming off his lone defeat as a pro, a very close, controversial split decision to Steve Chambers (23-1-1). Prescott, (23-3, 19KO's) who is ranked #11 by the WBA, began his career knocking out seventeen of the first eighteen opponents he faced. Prescott shocked the boxing world when he completely annihilated current WBA jr. welterweight champion, Amir Khan, knocking him out in the first round when the two met in 2008. Prescott has since all but begged Khan to step back into the ring with him, and get a shot at Khan's world title, but Khan refuses to fight the man who knocked him out. A win over "Khanqueror" Prescott would immediately throw Jargal into the mix of the loaded jr. welterweight division.

For Andrade (12-0, 8KO's), who along with representing the US in the 2008 Olympics, was the 2007 Amateur World Champion, it will mark the seventh time in just thirteen fights as a pro that the young star will be featured on ESPN. The 23-year-old southpaw, has continued to impress each time he steps in the ring, and is coming off a dominating eight round unanimous decision over another once beaten prospect Alberto Herrera (7-1-1) on ESPN in his last fight.

Bell (8-1, 5KO's) bounced back nice in 2010, (after suffering his first loss as a pro in 2008,) picking up two victories, including a shut-out win in his last fight against previously undefeated Quinton Willis. Bell's has a very exciting non-stop, high output punching style which will make for a very entertaining fight against the highly regarded Andrade.

Tickets are on sale now and can be purchased by calling Ticketmaster at 1 (800) 745-3000 or visiting www.ticketmaster.com. Tickets can also be purchased by calling the Star Boxing office at (718) 823-2000 or visiting www.starboxing.com. Tickets are also available for purchase at the Mohegan Sun Box Office. Tickets are priced at $80, $50 and $35. ESPN will begin live coverage of the event starting at 8PM ET.
Posted by Michael Gerard Seiler at 12:07 PM