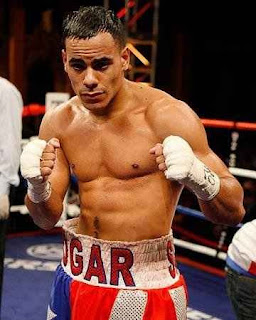 On Thursday May 5th, Popular welterweight prospect, Edgar Santana (24-3, 15KO's), returns to the ring, and will do it in front of his hometown fans in the Bronx, when he fights in the main event of the first of Joe DeGuardia's Star Boxing's, five scheduled shows in 2011, at the beautiful and historic Paradise Theater on Grand Concourse. Star Boxing, which began the "Punchin at the Paradise" series in 2006, has locked in five dates at the Theater for the remainder of 2011, starting with the first show on May 5th.

"So many boxing fans here in the Bronx and New York, are excited for Edgar's return to the ring on May 5th," stated Joe DeGuardia, CEO and President of Star Boxing. Edgar actually made his pro-debut on one of our shows, and now he is making his much anticipated return to the ring, in some ways his second debut, on yet another Star Boxing card. So not only is it fitting for him, but also fitting for us that we are getting our Bronx series back underway and featuring it with one of the most popular fighters from the Bronx in the main event."

Santana was riding a three-fight win streak, including his most impressive as a pro, when he won a ten round decision, in a war against current NABF Light Welterweight Champ, Joselito Lopez on Showtime's Showbox: The New Generation back in April of 2008. While Lopez would go on to win seven fights in a row, including picking up the NABF title in his last fight against unbeaten Mike Dallas Jr., Santana was forced to wait on the sidelines, after running into some legal problems outside of the ring. With those problems behind him now, Santana has re-dedicated his life to the sport and looks to pick up right where he left off and continue on his quest to becoming world champion. Santana is set to square off against Robert "Wolf" Jones, a veteran of seveteen professional fights, in a scheduled eight rounder.

Tickets are priced at $30, $50 and $100 and can be purchased by calling the Star Boxing office at 718 823-2000, visiting www.starboxing.com or simply by CLICKING HERE: Tickets can also be purchased by visiting the Paradise Theater box office, located at 2417 Grand Concourse in the Bronx, NY.
Posted by Michael Gerard Seiler at 4:10 PM