FRANKLIN LAWRENCE TO VITALI KLITSCHKO: “HEY, WHY NOT ME FOR JUNE 4?” 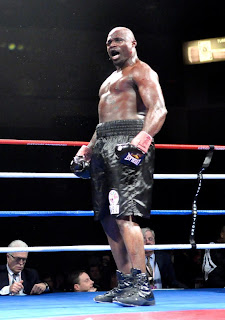 Photo Credit: Sara Rivest
INDIANAPOLIS, IN (April 4, 2011)—Fresh off his one round stoppage over Odlanier Solis on March 19th, WBC Heavyweight champion Vitali Klitschko has indicated that he would like to get back in the ring on June 4th and emerging contender Franklin “Yah Yah” Lawrence believes he has as much any right with his recent credentials to be Klitschko’s opponent that night.

Lawrence of Indianapolis has a record of 14-2-2 with nine knockouts and is coming off a tenth round stoppage over former U.S Olympian Jason Estrada back on January 29th.

“I know getting a title opportunity is based on merit and my last two wins are as quality wins as any of the guys they are talking about to be Vitali’s challenger.” Said Lawrence

“The fella that is rumored to have the inside track on the fight hasn’t had a big win in about six years and here I have two in about six months. I understand that Adamek maybe getting a shot in the fall but all you have to do is look at the Estrada fight’s and compare what he did and what I did and Estrada came into the fight with me saying it was the first fight he was at 100 percent in a long time”

“I know that given the opportunity I will rise to the occasion. I have one loss that is legitimate. Everyone who saw my fight with McCall knows I won that fight but that is the past and I am looking towards a shot at realizing my dream to bring the Heavyweight title back to the heartland of America.”

“Franklin has worked hard and all you have to do is see his wins. His brother offered Dereck Chisora an opportunity with a lot less of a resume then Franklin so if Vitali looks at Franklins victories he knows he is as worthy as him or Sosnowski”, said Lawrence’s promoter Dave Escalet of Fisticuffs Promotions.
Posted by Michael Gerard Seiler at 2:55 PM