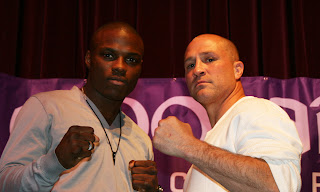 Jesse Brinkley discussed what this fight means to him in the wake of his loss against IBF super-middleweight champion, Lucian Bute.

“I never thought I would be back here without the world title. Let’s just start out by saying that the loss was a disappointment to me. I haven’t gotten over that loss.”

“I want to be back to the world championship level. I want to fight for another world title. I’m here to fight Peter Quillin because I believe he is the type of fighter that if you beat him you are right back at the HBO/Showtime level.”

“After the fight with Lucian, I have a lot of questions that need to be answered. I need to know what it is like to go to war again with a young lion.”

Peter “Kid Chocolate” Quillin focused on the fact that this fight is a big step up in his career.

“Come April 29th, you’re going to see Kid Chocolate and Jesse Brinkley get it on. You have to take opportunities when they come. I want the world to see me as a bona fide champion.”

“I know Jesse is going to be tough. I want to be 24-0 after this fight. If the knockout comes, then I will go home with a big knockout, but if not, I will settle for a big win.”

“This is a great fight for boxing fans.” Says Robert Diaz, matchmaker for Golden Boy Promotions. “We have high expectations for Peter Quillin, and we think that his style matches up perfectly to beat Jesse Brinkley.”

Let’s Get It On Promotions’ Tommy Lane spoke in more detail about the main event.

“After the Bute fight in the dressing room, Jesse came to Terry and me and asked ‘When can we go back and rock Reno?’”

“Its a fight that Jesse can win, and should win. But it’s the type of fight where each guy is the gate-keeper to the other’s career. It is a fight that is very consequential.”

Let’s Get It On Promotions’ Terry Lane, discussed how this card is a kick off to the Cinco De Mayo celebration.

“We invite the Mexican and Mexican-American community to this fight on April 29th to help begin their Cinco De Mayo festivities. Boxing is so entrenched in the Mexican culture.”

Continuing with the Cinco De Mayo theme, undercard details were announced at Tuesday’s press conference. Returning to fight in Northern Nevada for the third time is “El Negro Mexicano” “Lightning” Lonnie Smith (12-2-2) from Las Vegas, NV. Smith will fight in a six round bout. It was also announced that decorated amateur “Chuy” Elizondo from Carson City, NV will make his pro debut on the undercard. Undefeated super-middleweight Carlos Gaytan from Reno (2-0-1, 1 KO) will also be on the undercard in a four round bout.

What is being billed as a special attraction bout, former two-time University of Nevada, Reno collegiate welterweight boxing champion, Thomas Gennaro, will be making his pro debut on April 29th. Gennaro, who has thrived in a long standing Northern Nevada boxing tradition, is excited to be fighting as a professional.

“This has been something that has crawled inside me and I need to do. April 29th, I’m going to come out and let it shine.”

“I’m ready to get back in the ring in front of Reno and make this happen. I’m ready to rock!”

As a side note, and some fun boxing trivia, famed boxing writer Michael Marley once fought for the University of Nevada Boxing team. So did Mills Lane, who was the 1960 collegiate welterweight champion.

Brinkley vs. Quillin will be held at the Reno Events Center in Downtown Reno. The fight will be televised on Telefutura’s Solo Boxeo series. Check local listings. Tickets are available on Ticketmaster.com, by calling 800-745-3000, or by visiting the Silver Legacy or Reno Events Center box office during hours of operation. Prices are $33.25, $63.25, and $103.25. Doors open at 6pm, first bell at 7pm. The card is being presented by Don Chargin Productions, Golden Boy Promotions, Let’s Get It On Promotions, PR Entertainment, The Eldorado Hotel Casino, Silver Legacy Resort Casino and The Circus Circus Hotel Casino.

All bouts subject to change.
Posted by Michael Gerard Seiler at 6:37 PM