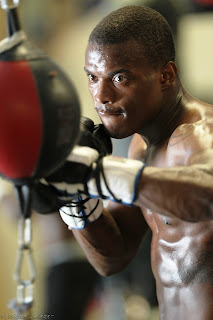 The 27-year-old Quillin (23-0, 17 KOs), born in Chicago and raised in Grand Rapids (MI), moved a year ago from Brooklyn to LA, where he hooked-up with Roach and started training at his famed Wild Card Gym, in addition to signing an exclusive promotional contract with Golden Boy Promotions.

“Kid Chocolate” headlines an April 29 show against former world title challenger Brinkley (35-6, 22 KOs) in Reno, Nevada, airing on Telefutura in a 10-round bout for the vacant USBO super middleweight title.

The Vortex, according to Bose (www.bosemangement.com), is an intimidating machine to look at, about 6-feet wide and 4 to 5 feet deep. Bose trains a lot of celebrities at his gym, some on The Vortex, including Robert Downing, Jr. for the movie, Ironman, as well as many mixed-martial-arts fighters. Boxers from the Wild Card like Quillin have started taking advantages of this functional training machine.

“The Vortex is unique in that it helps train athletes in more of a sports specific way,” Bose explained. “A lot of training in boxing is kind of old fashioned. The machine can be weighed down with 30 pounds for boxers who throw 1600 to 1800 punches within a five to 12 minute span. It increases their punching strength and speed, as well as get them ready for the later rounds, when a boxer’s arms are fatigued and they can barely hold them up.

“’Kid’ worked on it for six weeks before going to train in high altitude, where this training will also help his body recover faster. I saw quite a difference in him from the first day when he started with 15 pounds on his arms. After six weeks he made it up to 45 pounds for each arm, throwing 200 punches without a rest. A fighter may average 600 punches thrown in a fight. Training on this machine they have 45 pounds for each arm, throwing 200 punches in two minutes, for 20 minutes without resting. Throwing punches in the ring is no big deal because their arms won’t get tired.”

“The Vortex is like a torture machine,” Quillin remarked. “Brad had me throwing 1200 punches with 30-pound weights. I noticed a big difference. I really feel stronger. I’m up at Big Bear now to get used to the altitude for the fight in Reno. Freddie’s my trainer but he’s with Manny (Pacquaio), so I’m working with his assistant, Eric Brown. I work a lot with him and Freddie still oversees everything.”

Brinkley, who is coming off a ninth-round knockout last October in an IBF super middleweight title fight against champion Lucian Bute, will be fighting Quillin at home in Reno. The 34-year-old Brinkley is, perhaps, best known as a participant in the The Contender, Season One reality television show. His most notable victories have been against Otis Griffin, Curtis Stevens, and Joey Gilbert.

“This is the biggest fight of my life,” the personable Quillin remarked. “Brinkley’s coming off his world title fight against Bute and I wanted to find-out how I’d do against Jesse Brinkley. He’s strong, tough and always comes to fight. I want to campaign as a middleweight but walk around between fights weighing like a super middleweight. I took this fight because I couldn’t say no to my first title fight.

“I’m as sharp as a razor. He’s going to have to watch-out for me punching from every angle. I can hurt him with punches to the head or body. Once he punches, I’ll counter-punch. Boxing is a lot like poker, spades or dominos – it can fall either way. I’ll be trying to knockout Jesse Brinkley, but anything can happen, so I’m training to just win and prove that I belong at the elite level.”

For more information about Peter “Kid Chocolate” Quillin go online to www.TheKidChocolate.com or follow him on Twitter @/Kid Chocolate.
Posted by Michael Gerard Seiler at 7:05 PM