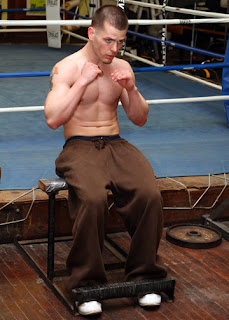 On Friday, April 22nd, at the Mohegan Sun in Uncasville, CT, Joe DeGuardia's Star Boxing will present that weeks ESPN "Friday Night Fights". Headlining the card is "The Mongolian Mongoose" Bayan Jargal (15-1-3, 10KO's) squaring off against the "Khanqueror" Breidis Prescott (23-2, 19KO's) in a ten round jr. welterweight showdown. Also featured on the card will be 2008 US Olympian, and highly regarded undefeated jr. middleweight prospect, Demetrius Andrade (12-0, 8KO's) taking on once beaten Omar Bell (8-1, 5KO's). If the two featured ESPN bouts aren't intriguing enough for you, Star Boxing's Publicist, Kevin Rooney, Jr. will be making his pro-debut on the undercard.

The 26-year-old Rooney Jr., who graduated from Fordham University in the Bronx in 2007 and has been working for Star full-time since the summer of 2008, is trained and managed by his father, Mike Tyson's former trainer, Kevin Rooney Sr. After beginning boxing at just five years old, Rooney Jr. stepped away from the sport before coming back to it and returning to training after he came on board with Star.

"I always had the itch to get back into it, but when I started working for Joe (DeGuardia) and Star is when I really started to seriously think about it," says Rooney Jr. "I started training and took it one step at a time and now I am ready to take the next step."

While the typical fight night is a bit hectic for Rooney Jr. who handles all of the Public Relations, as well as many of the event coordination duties for Star, the April 22nd show will have him undoubtedly a bit more busy.

"Luckily for me my father's accent is Staten Island, Joe's is the Bronx, so I shouldn't get the two confused when I'm getting orders from both throughout the night," says Rooney with a laugh.

"He better end his fight quickly and be in and out of that dressing room before the next fight starts or we will have a real problem," jokes DeGuardia, CEO and President of Star Boxing, a former boxer himself. "All jokes aside, we couldn't be happier than to have Kevin make his debut on one of our cards. Working for Star, and the relationship we have built together the last three years it's only fitting."

"For those who haven't seen Kevin fight before, he has ability," adds DeGuardia. "I think a lot of people are going to be surprised when they see him in the ring. We are excited to see how far he can go with it. Besides the fact that he has his father's name and his father behind him, he is good looking Irish kid, with an exciting style, fighting out of New York. We are looking forward to start bringing in the Irish fan base, which is known to come out in armies to support their Irish fighters."

"I'm very excited for the opportunity to have my debut on one of Joe's cards," says Rooney. "Not a lot of people get to ever fight on such a high profile card, let alone make their pro-debut on it, so I couldn't be more thankful. I have been thinking about this day for a very long-time, and finally it's almost here. I have a lot of people coming out to show their support and I don't plan on letting them down."

Regarding his future in the sport, Rooney is optimistic.

"I'm working really hard every day in the gym. I feel myself maturing and improving each and every day. There are things that I obviously need to work on, but that's the great thing about this sport, you are always learning something new. While I might not have the biggest amateur background (Rooney Jr. had approximately 12 fights total from when he started as a young kid till now) I feel that I have one of the best trainers in the entire world in my father, and as long as I keep listening to him and keep working hard, the sky's the limit."

Tickets are on sale now and can be purchased by calling Ticketmaster at 1 (800) 745-3000 or visiting www.ticketmaster.com. Tickets can also be purchased by calling the Star Boxing office at (718) 823-2000 or visiting www.starboxing.com. Tickets are also available for purchase at the Mohegan Sun Box Office. Tickets are priced at $80, $50 and $35. ESPN will begin live coverage of the event starting at 8PM ET.
Posted by Michael Gerard Seiler at 3:05 PM