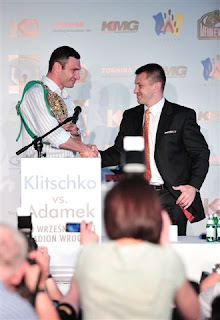 
Vitali Klitschko:
"I like Poland. I've been here many times. I've lived here before. I have a lot of friends here. I have many good memories linked with Poland, they're positive. It just worked out that now I'll be fighting a Polish boxer. The most important thing to me will be the result. What more can I say? I think that it'll be a positive moment that will represent our countries. To quote Nelson Mandela: 'Sport has the strength to change the world'."

"You are a bad boxer if you don't wish to win a world title. Tomasz has a chance to become one. In this situation the only questions can be: Is this too important for him? Is it too late? It's never too early, never too late. He got his chance and he definitely has a chance if he wants it. The question is though, if I will let him take that chance."

"He's (Adamek) not an easy opponent, good technique, good condition, and a big heart to boxing, strong character and a strong desire to win. Those are the most important elements in boxing."

Reporter: Your fight with Adamek will be in Wroclaw, Poland on September 10, with approximately 40,000 fans. The Ukraine and Germans will come but there will be a dominance of Poles. Do you worry about a loud uproar for Adamek? "I'll repeat one more time that boxing fans are there to watch the fight. I understand that Tomasz will have a huge fan base. For me that's not the first time. I've fought in Germany against a German, in America against an American, in Britain against a Brit. So now that I'm fighting in Poland against a Pole, it makes no difference. The ring is always the same." 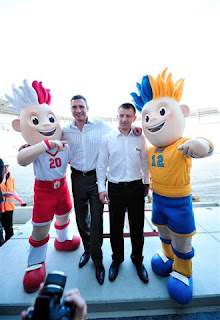 Adamek and Klitschko at new soccer stadium
Credits: SMG Polska
Tomasz Adamek:
"I fight differently than I used to. I take a lot less hits, I'm more balanced. If you have a knack to box I think it's impossible not to keep learning. Everything is possible. You have to have faith and never give up. If you give up, you'll never win."

"In both Heavyweight and Cruiserweight they all said I was too small, and now it's (heavyweight) a hard weight class. As he (Vitali) gets older he's trying to do impossible things. I have shown that with determination you can win. I have a great trainer who taught me a lot since I started working with Andrew and they used to pound me. This lets me know that you can always beat the strongest people."

Reporter: In one of your last interviews, you said Vitali is getting older. Do you foresee maybe by the 7th or 8th round that he will become winded? "If I keep pushing a high

pace then definitely because he is a bigger and taller guy so he tires faster. I have to keep changing my position while striking. This is what I'll be working on with Roger. I'll be working on being fast. This is an area where I'll be able to beat him."

Reporter: In boxing you say that if you want to tire someone out, you hit them hard, is this true with Klitscko? "Absolutely. I'll have to work up and down. He's a big guy. We're working on that. I have a good trainer."

"I'll definitely have to keep a low position so I can get away from some serious strikes. That's the key. The rest you'll have to wait until September 10th to see. I have to represent myself well for Poland and the rest of the world."

"If I take on a challenge I'm going to put 120% into it. I invite you all to the fight on September 10th. You can watch it live in the stadium, or on TV. Best wishes to all.."


Fight and Ticket Information will be released shortly.
Posted by Michael Gerard Seiler at 8:58 PM