PUNCHIN AT THE PARADISE RESULTS

Earlier tonight, Joe DeGuardia's Star Boxing, brought live professional boxing back to the Bronx with the latest installment of the "Punchin at the Paradise" fight series at the historic Paradise Theater on Grand Concourse in the Bronx. The show, which was the first of five scheduled shows at the Theater for 2011, was headlined by much anticipated return of The Bronx's Edgar Santana as he took on Robert Jones in the eight round main event. 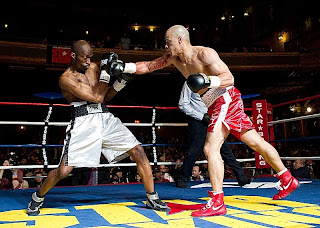 Santana vs. Jones
Santana who was returning to the ring for the first time since 2008, needed just one round to shake off the ring rust.  After a feeling out round in the first, Santana came out in the second and landed a vicious left, right combination to the body followed by a huge overhand right that sent Jones down hard.  Jones beat the count, but was clearly on shaky legs.  Santana wasted no time, jumping all over Jones with a barrage of shots, with Jones reeling agains the ropes the referee mercifully called a halt to the contest.  Impressive showing for Santana against Jones who had never been stopped before.  With the win Santana improves to 25-3, 16KO's and looks to be on his way to putting himself back into mix of top 147 pounders in the world.
DEGUARDIA'S STARS SHINE ON UNDERCARD
Super Middleweight Jason "Monstruo" Escalera and Super Featherweight Emmanuel "Manny" Gonzalez, both made their Star Boxing debut's successful ones, as each scored TKO's over their respective opponents.

The former NY Golden Gloves Champion, Gonzalez, who was born in the Bronx, but now trains out of Puerto Rico, made quick work of his opponent Jacob Thorton, much to the delight of the large contingent of fans that came out to support the Bronx native. 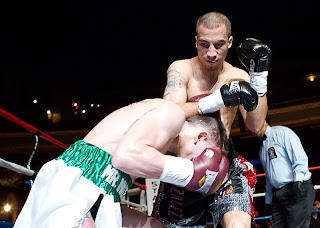 Gonzalez vs. Thornton
Gonzalez came out looking very sharp and crisp with his punches. Almost immediately a hard right hand staggered Thorton. Thorton covered up, but something seemed to be wrong with his leg, as he winced in pain and was visibly limping. Gonzalez didn't make things much easier for his opponent as he trapped him in his corner, landing heavy rights and left both to the body and head. With Thorton taking heavy shots against the ropes, the ringside physcian stepped in to check on his leg, and quickly called a halt to the contest. Official time of the stoppage was 1:40 of the first round. With the win Gonzalez improves to 8-0, 7KO's.

Escalera, also a Golden Gloves Champion, who was fighting for the first time outside of his home state of New Jersey, easily lived up to his nickname "Monstruo" (Spanish for Monster) as he came out in the first and landed some monstrous over hand rights against his opponent Mustafah Johnson. Near the end of the first, two huge rights had Johnson clearly hurt and wobbly against the ropes, but luckily for him the bell sounded ending the round. 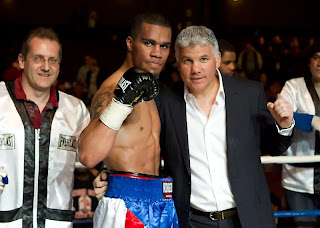 Escalera With Promoter Joe DeGuardia
It was more of the same for Escalera in the 2nd. With Johnson laying against the ropes Escalera landed a vicious right to the body, sending Johnson crumbling over in pain. The referee started his count but soon waved it off, officially calling a stoppage to the bout at 1:13 of the 2nd round. Escalera improves to 11-0, 10KO's. Look for both young stars to be back in action on the next "Punchin at the Paradise" card, scheduled for Thursday July 7th.