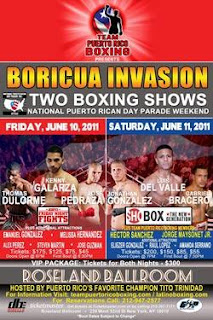 Galarza, Dulorme, Pedraza top Friday night; Del Valle, Gonzalez, Arroyo, Sanchez, and Bracero to see action on Saturday
NEW YORK, NY (May 12, 2011) Two of boxing’s top promoters have put together a tribute to the great Puerto Rican boxers of past and future in the only way they know how: by staging two spectacular boxing shows, back-to-back in the same venue, loaded with the best young talent the island nation has to offer and hosted by one its greatest champions on the precipice of Puerto Rican Day Parade weekend.

On June 10 and 11 the Roseland Ballroom in will be the headquarters for Boricua boxing pride as Gary Shaw Productions (“GSP”) and DiBella Entertainment (“DBE”) proudly present Boricua Invasion I and II. Boricua Boxing I will air live on ESPN2 Friday Night Fights, while Boricua Boxing II will be televised live on Showtime on ShoBox: The New Generation.

The next night, with legendary Trinidad once again acting as host, Boricua Invasion II will feature five more members of Team Puerto Rico Boxing taking their turn in the spotlight, as popular undefeated Puerto Rican featherweight Luis “Orlandito” Del Valle (12-0, 10 KOs) faces the stiffest test of his young career against the all-action Vietnamese brawler Dat Nguyen (117-1, 6 KOs). Rounding out the ShoBox broadcast will be Vincent Arroyo, coming off an 8-round decision over previously unbeaten Willie Nelson, against fellow Boricua Hector Sanchez (19-1, 9 KOs) and intimidating middleweight knockout artist Jonathan “Mantequilla Gonzalez (12-0, 12 KOs) against an opponent to be named.

In a special off-TV attraction, unbeaten Gabriel “Tito” Bracero will duke it out with an opponent that will be announced in the coming days.

“These two events are the only right way to celebrate Puerto Rican boxing and its heritage and its future,” said Shaw of the blockbuster shows. “The mood in the Roseland Ballroom will be electric both nights, as New York City’s Puerto Rican citizens and fans of action-packed boxing flock to see their champions of tomorrow.”

“We are rolling out Team Puerto Rico Boxing in style with these two events,” added Lou DiBella. “If you live in the New York area, get a ticket and see what true nationalist passion looks and feels like, as the Puerto Rican fighters and fans join forces to celebrate their great country. Friday, June 10 and Saturday, June 11 will be unforgettable reminders of the glory days of boxing and I’m proud to be doing this.”

For eight decades, the fabulous Roseland Ballroom has been known as "The World's Greatest Ballroom." It has echoed with some of the greatest concerts, entertainers and events of our time. Dancers such as Arthur Murray, Joan Crawford, Ray Bolger and Fred Astaire have graced its stage and entertainers from Ozzie Nelson to The Rolling Stones and Madonna have played there. Roseland continues what it started in the 1920's, which is the tradition of bringing distinguished acts and clients to its venue, but now with an updated style.