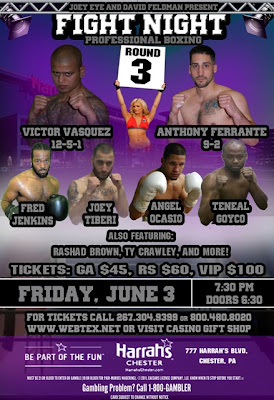 Ocasio; Brown; Tiberi; Jenkins and the pro debut of Naim Nelson highlight ROUND 3 Undercard at Harrah’s Chester on June 3rd
By: Marc Abrams
CHESTER, PA (May 25, 2011)—On Friday night June 3rd at Harrah’s in Chester, Joey Eye Boxing along with David Feldman will present ROUND 3 that will be headlined by a six round Lightweight scrap between Philadelphian’s Victor Vasquez and Gutavo Daily.

Fans in attendance will be treated to a six bout undercard that will feature some of the most popular and up and coming talent in the Philadelphia.

Topping the undercard will be popular Light Heavyweight Tony Ferrante of Northeast Philadelphia taking part in a six round bout against Joe Park of Florence, South Carolina.

Ferrante, 26 years old, won his first nine bouts which included wins over Anthony Pietrantonio (6-1) and he won the WBF United States title with a eight round majority decision over Billy Bailey.

Ferrante lost that title when he dropped a ten round unanimous decision to Chuck Mussachio (15-1-2).

The Thirty-seven year old Park of Florence, South Carolina has a respectable record of 8-5 with six knockouts and will be a good test for Ferrante as he has fought some top prospects.

Park won his first four bouts via stoppage before dropping an eight round unanimous decision to undefeated Shane Benefield (11-0).

Park has also fought Marcus Upshaw (3-0) and his last bout came against undefeated knockout artist Jason Escalera (5-0) where Park was stopped in three rounds back on June 25th, 2009.

In a four round Lightweight bout, undefeated Lightweight Angel Ocasio will see action against Randolph Scott.

Ocasio, twenty-one years old of Philadelphia, has a record of 4-0 with one knockout is coming off an impressive four round unanimous decision over George Santiago as part of ROUND 2 that took place on March 18th at Harrah’s in Chester.

Besides his exciting style, Ocasio brings a rabid fan base that has supported him emphatically through his first four bouts

Brown will making his first start in his home state after three straight wins in Atlantic City.

Burnette, twenty-six, will be looking for his third straight win as he is coming off a unanimous decision victory over experienced William Wilson (8-6) on February 18th.

Part of the “Delaware’s First Family of Boxing”, Super Featherweight Joey Tiberi (3-1, 3 KO’s) will be looking to thrill his fans when he battles Jonathan Ocassio (0-7) of Philadelphia in a bout scheduled for four rounds.

After his scintillating pro debut knockout as part of ROUND 2 in March, Super Middleweight Fred “Freddy J” Jenkins Jr. of Philadelphia will take on six fight vet Corey Preston.

The twenty-four year old Jenkins, who is the son of longtime and well known Philadelphia trainer Fred Jenkins, looked explosive in taking out Scott Brunner in two rounds on March 18th.

Preston, 1-5 of North Carolina has been in with tough competition and Jenkins will be the fourth undefeated fighter that he has faced.

Rounding out the card will be the pro debut of Lightweight Naim Nelson taking on Kywame Hill.

Both Nelson and Hill are from Philadelphia so bragging rights will be at stake.

The fights will be recorded for a tape delay broadcast by www.gfl.tv