“BATTLE AT THE GREAT LAKES” 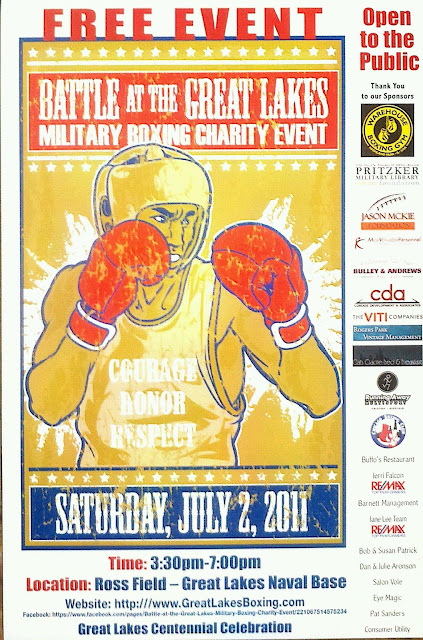 Amateur Boxing Event To Help Raise Money For Military Families
Support military families July 4th weekend, and join us for a FREE Charity Boxing Match for the Troops on Saturday, July 2, 2011. The event is open to the public, and will be held at Great Lakes Naval Base – Ross Field. All proceeds will benefit the Navy-Marine Corps Relief Society. First bout starts at 3:30pm.
Several top, Chicago area and local boxers will be participating from Chicago and area boxing clubs, including Warehouse Gym in Highland Park.  Warehouse is one of several area businesses that are donating to this worthwhile cause.
In addition to boxers, there will be several former and current Chicago Bears players on-hand.
“Battle at the Great Lakes” was launched by former Bears and current Baltimore Ravens fullback, Jason McKie, and his charitable foundation, the Jason McKie foundation.
McKie, a resident of north suburban Gurnee, has been active in the community throughout his NFL career.
In 2008, McKie launched the Jason McKie Foundation of the Institute for Science and Health, which focuses on programs in the areas of education and wellness, with an emphasis on making an impact in the lives of families of soldiers. The Foundation provides educational scholarships to children and spouses affected by a loss, or severely injured parent or spouse.
Please come out and support those who have given our country so much.
For more information: www.greatlakesboxing.com or visit Facebook – The Battle at Great Lakes.
Posted by Michael Gerard Seiler at 11:10 PM