Peltz Boxing News
Bethlehem, PA — When intra-state welterweight rivals Ronald Cruz, of Bethlehem, PA, and Doel Carrasquillo, of Lancaster, PA, square off July 1 at the Sands Casino Resort Bethlehem, they will be helping other local fighters display their skills as well.

A host of Eastern Pennsylvania-based fighters representing nearby towns will fill out the undercard, which begins at 7.30 pm in the 1,500-seat tent on the grounds of the Sands Casino. 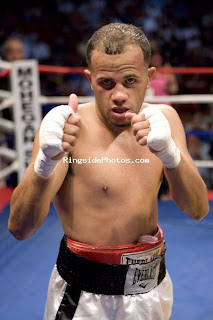 Eliud Torres (pictured above), of Allentown, PA, takes on Bryne Green, of Vineland, NJ, in the six-round lightweight semifinal.

Green, 27, comes into the fight off the biggest victory of his career, an eight-round decision over Ryan Belasco, of Wilmington, DE, on March 18 at Harrah’s Casino, Chester, PA. Green is 6-4, 3 K0s, in three years as a pro.

Brown, 22, knocked out Philip Burnette, of Myrtle Beach, SC, in the first round June 3 at Harrah’s Casino, Chester, PA. Brown, former batboy for the Philadelphia Phillies, is 4-0, 2 K0s. 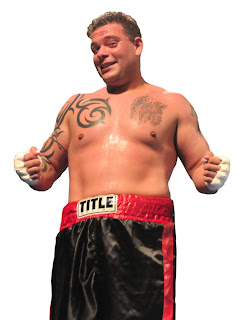 Popular heavyweight William Miranda (pictured above), of Allentown, PA, meets Zeferino Albino, of Philadelphia, PA, in a rematch of their four-round draw on the May 21 card in Reading.

Albino scored a major win earlier this year when he knocked out Big John Poore, of Upper Darby, PA, in two rounds on Jan. 22 at Harrah’s Chester. Poore was 21-4, 18 K0s, prior to losing to Albino.

Another heavyweight, Eric Newell, who played football at Bethlehem Catholic High School and Kutztown University, makes his local debut in a four-round fight against unbeaten John Mercurio, of Philadelphia, PA.

Newell, 28, is 1-1, 1 K0. In his last fight March 4 in Atlantic City, he lost a four-round decision to Ali Santos, of Camden, NJ. In his pro debut last year, Newell knocked out Octavius Davis, of Wilson, NC, in two rounds.

Mercurio, 32, is 4-0, 3 K0s, and he defeated Miranda via four-round decision in his last fight April 1 at the South Philly Arena.

Blake, 29, is 2-0, 1 K0. Abrams, 34, is 1-6, but has never been stopped and three of his losses were to Pawel Wolak, Gabriel Rosado and Jose Angel Rodriguez, all current world-rated junior middleweights.

Welterweights Chris Plebani, of Bristol, PA, and David Navarro, of Philadelphia, PA, meet in a four-round contest with each man looking for his first win as a pro. Plebani, 24, is 0-2; Navarro, 33, is 0-3.

Tickets for the July 1 card are priced at $51 and $78. They can be purchased by calling Peltz Boxing (215-765-0922) or from the gift shop at the Sands Casino Resorts Bethlehem. They also are available online at www.ArtsQuest.org and www.peltzboxing.com.
Posted by Michael Gerard Seiler at 9:48 PM