Is A Vicious Cycle About To End Mayweather's Run? 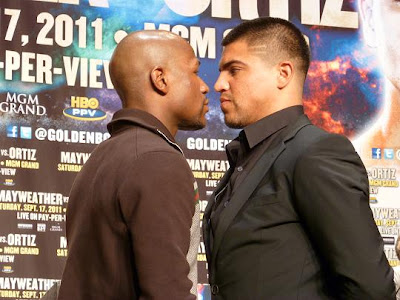 You can call it a comeback, but you cannot call it a tune-up bout.

On Saturday, September 17th, Floyd Mayweather, Jr. (41-0, 25 KO's) returns to the ring to face "Vicious" Victor Ortiz (29-2-2, 22 KO's) in a monumental showdown at the MGM Grand in Las Vegas, Nevada for Ortiz' WBC Welterweight title. This stimulating match-up will be televised LIVE on HBO PPV.

"Every time I step away from the sport, I make more money," exclaimed Mayweather during Tuesday's press conference at the Hudson Theatre in New York's Times Square. "But, I miss the sport and I'm ready to fight!"

Mayweather, 34, has been inactive since defeating "Sugar" Shane Mosley via twelve-round unanimous decision on May 1, 2010. Instead of selecting an easy opponent for his return, Mayweather elected to face Ortiz, who called him out in the course of an ESPN interview with Brian Kenny shortly after defeating Andre Berto.

"I wasn't 100% content with my performance versus Berto," revealed Ortiz. "I could have walked away with a knockout."

Aside from Manny Pacquiao, who refuses to obliged to Mayweather's demand for an Olympic-style drug test (random blood and urine testing preceding and following a potential fight), Ortiz is the best welterweight in the world, and he agreed to the testing warranted by Mayweather. Early odds in Las Vegas casinos have made Mayweather a herculean favorite over him at 8-1, although Ortiz is a highly formidable threat to dethrone the fighter nicknamed "Money".

Mayweather's trusted advisor and C.E.O. of Mayweather Promotions, Leonard Ellerbe, shared his thoughts on a possible Manny Pacquiao fight in the future.

"Everyone knows why the fight didn't happen," said Ellerbe. "He (Top Rank C.E.O. Bob Arum) knows his fighter will get his ass tore up. That's why the fight won't happen. This (Mayweather vs. Ortiz) is the biggest fight we could make. Manny is fighting guys Floyd already beat. When Floyd fights Manny, it will be an easy fight. Bob Arum is controlling the pot. Why put Pacquiao in there with him (Floyd) when he can match Pacquiao with one of his fighters, and no one will question him?"

Ellerbe added, "Mayweather is the king of the throne. He's the biggest attraction in the sport. There's not going to be a lot of moving around. Ortiz' style matches Floyd well. It's going to be an easy fight. Ortiz makes way too many mistakes."

How long does Mayweather believe it will be before Olympic-style drug testing is adopted as a norm in the sport of boxing?

"When I become the head of boxing, it's going to be mandatory for everyone," stated Mayweather.

Is Mayweather's run of being unbeaten about to end?

"I want to go down as an all-time great," acknowledged Ortiz. "Now, I have that opportunity in front of me."

One of Ortiz' advantages in this upcoming contest is his southpaw stance, which is well-known to give conventional fighters, such as Mayweather, obstacles to overcome. Southpaws are extremely tricky. In 2006, Mayweather was nailed by a right hook from Zab Judah in the second round, and subsequently, his right glove touched the canvas. Referee Richard Steele should have ruled it a knockdown. Yet, Mayweather broke Judah down as the rounds progressed, and coasted to a twelve-round unanimous decision win. While Ortiz is not as sharp a puncher as Judah, he owns a ton of dynamism in both hands. Ortiz is naturally right-handed, and his right hand, which he will be jabbing with, is his most powerful one.

Another edge Ortiz has on Mayweather is youth; Ortiz is just 24-years-old, and is in the prime of his career. While Ortiz may lack the experience Mayweather holds, his ten-year upper-hand in age can be a decisive factor in the fight when considering Mayweather has been off over a year. As distinguished as Mayweather is and has been, his best days took place in the junior lightweight division ten years ago. How will the layoff affect Mayweather's superior lateral movement?

Ortiz, however, does not feel his age is an additional benefit. 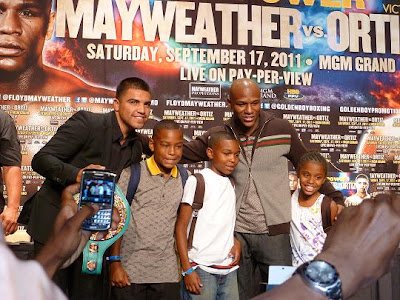 "There are no advantages," responded Ortiz. "Mayweather is a great fighter, and I will be prepared to the fullest."

Will the size differential matter?

Ortiz seems to have settled in nicely at welterweight, and is by nature the bigger man. Having a smaller body frame, can Mayweather withstand the pressure Ortiz will bring? 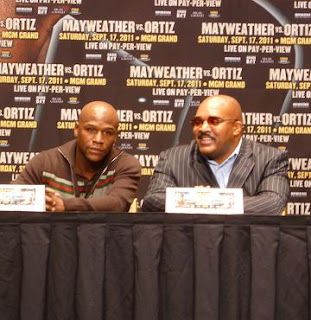 "When the night of the fight comes, I'll be a lot bigger than he is," expressed Mayweather.

Can Ortiz catch Mayweather with the big shot?

Ortiz may not be quicker than Mayweather, but he will undoubtedly be the hardest puncher Mayweather has ever faced. And, when you compile that with youth, a southpaw stance and a dominating, Carmen Basilio-like performance against a previously unbeaten Andre Berto at a convenient weight, you have the recipe for a colossal upset. Or, is it? 8-1 odds seem a little unrealistic anyway.

If you believe in karma, Ortiz may have some comfort in that category as well. It just may be his time to shine.

To briefly summarize, Ortiz' mother said that he would never amount to anything in life. Ortiz, who was forced to grow up in the foster-care system after his mother abandoned him at 7-years-old, has already evolved into an outstanding prizefighter and a very admirable person. Now, Ortiz has a very pragmatic chance to cement a place in boxing history, if he can become the first man to defeat the brash-talking, boxing savant, Mayweather. The last time Floyd Mayweather, Jr. lost was in 1996 as a featherweight in the amateurs when Bulgarian Serafim Todorov beat him on points 10-9.

Just imagine what a terrific story it would be if Ortiz won: A seven-year-old boy, who is now a man, told by his mother he would never amount to anything, an underdog who overcame immense hardships his whole life, rose to the top of the boxing landscape and emerged as the first fighter to defeat the most technically-gifted boxer of his generation. 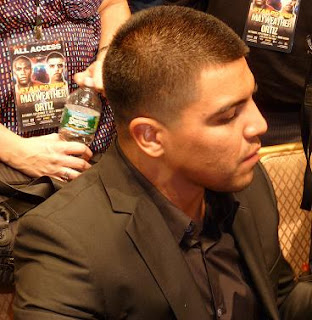 "I'm here to fight," explained Ortiz. "I am going to leave it all in the ring."

Maybe, we shouldn't jump ahead?

On the other side of the coin, Floyd Mayweather, Jr. is arguably the best boxer since Muhammad Ali, and currently ranks as the best, or one of the best pound-for-pound fighters in the world. Mayweather possesses a remarkable resume of dominant victories against the likes of Genaro Hernandez, Angel Manfredy, Diego Corrales, Jose Luis Castillo (twice), Arturo Gatti, Zab Judah, Oscar De La Hoya, Ricky Hatton, Juan Manuel Marquez and "Sugar" Shane Mosley. Mayweather's level of experience compared to Ortiz is simply overwhelming. And, Mayweather holds leverage in a few other key areas.

Mayweather is deeply regarded as the best defensive fighter on the planet, as he is able to make his opponents miss with countless punches while standing directly in front of them. Mayweather also switches from defense to offense more efficiently than any fighter in the entire sport. He boasts the most pinpoint, accurate punches, and he repeatedly lands crisp, clean combinations. Will Ortiz be able to handle Mayweather's judicious punches? Or, is Mayweather too old to methodically break down a bigger fighter, such as Ortiz, compared to his previous opponents in the lower-weight classes? Since 2005, Mayweather only has four knockouts in his last ten fights versus fighters 140 lbs. and greater. And, Mayweather only has one stoppage win since 2006, a tenth-round TKO against Ricky Hatton in 2007. That being said, Mayweather doesn't need a knockout to win, but he will need an immeasurable resource - his legs, which are the first asset to go on an aging fighter.

HBO boxing commentator Larry Merchant once said that it would be interesting to see what would happen when Mayweather would have to stand and fight. Mayweather's abilities are a cut above anyone in the sport, however, he is not getting younger. This is Mayweather's initial fight back after a year away from boxing. All of the training and sparring in the gym can never take the place of a real fight. If his legs get old in the ring against a larger, younger opponent, Mayweather will be forced to come out of his defensive shell to showcase the offensive firepower fans used to see from him in the lower-weight classes, especially the 130 lb. division.

Can Mayweather still be in the prime of his career? 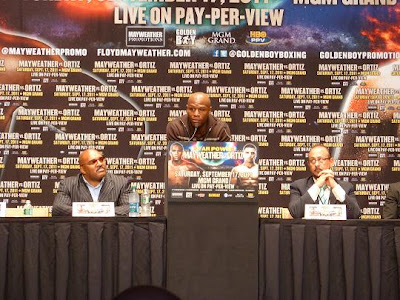 Mayweather isn't fighting Pacquiao, although Ortiz presents a comparable challenge. Ortiz and Pacquiao are both southpaws, and they contain a sound offense. But, Ortiz is a much younger and bigger man, who punches harder. Pacquiao overwhelms his opponents with speed and whirlwind punches. Neither man has been in the ring before with a defensive genius like Mayweather and, a fighter who has never tasted defeat, does not now how to lose. Mayweather always finds a way to win. He knows no other way.

Will factors outside the ring impede Mayweather's performance on September 17th?

Mayweather is involved in business activities, such as music promotion. He owns Mayweather Promotions, and has also briefly mentioned doing a reality television show with rapper 50-Cent based on their friendship.
It is well-known Mayweather enjoys gambling on sports in Las Vegas by the numerous pictures posted on his facebook page of his winning tickets, mainly from NBA games. Then, there are Mayweather's pending legal issues. Manny Pacquiao has sued him for 100 million dollars in a defamation of character lawsuit. Recently, Mayweather refused to attend the deposition hearing to state his side of the story. Additionally, Mayweather is facing charges of domestic violence against his ex-girlfriend, Josie Harris. The felony counts of grand larceny, robbery and coercion could land the fighter up to 34 years in prison. The preliminary hearing is scheduled for October.

Leonard Ellerbe did not discuss these issues in great detail.

In regards to Manny Pacquiao's defamation of character lawsuit against him, Mayweather did not shy away from questions. Instead, he made a strong and valid point on the matter. 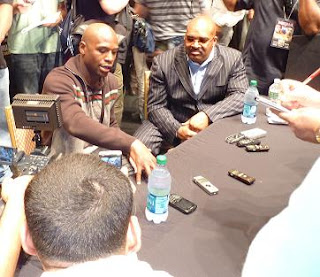 "Why didn't they subpoena any websites that put these comments on the internet?" voiced Mayweather.

Will Mayweather be completely focused on Ortiz? So far, distractions outside the ring have never affected Mayweather inside of it.

It remains to be seen whether or not boxing fans will ever get to witness Mayweather vs. Pacquiao. What we do know is that there is a major curve in the road to get there. No, it's not just the Olympic-style drug test or Bob Arum; It's Victor Ortiz. We are getting a highly-competitive fight on September 17th. You can surly bet on it. "Money" Mayweather knows it, and must break the "vicious" cycle in front of him for it to still have a chance at happening.
Posted by Michael Gerard Seiler at 9:47 PM