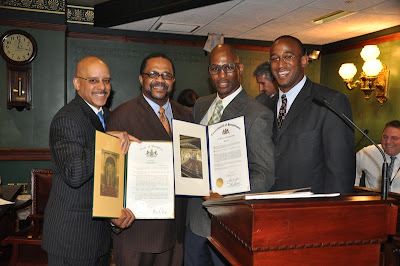 Pictured above from left to right: State Senator Vincent J. Hughes, Senate Democratic Appropriations Chair, State Representative Jewell William, WBC Light Heavyweight World Champion Bernard Hopkins and Deputy Whip of PA House of Representatives, State Representative Tony Payton all of whom hail from Philadelphia
Photo Credit: Office of Senator Hughes
Hopkins "Brings Down The House" With Inspirational Speech On Senate Floor
Harrisburg, PA (June 23)...The Pennsylvania State Government honored Philadelphia native Bernard Hopkins at the State Capital yesterday for his recent WBC Light Heavyweight World Championship victory as the oldest fighter in boxing history to win a world title. Hopkins was invited by Senator Vincent Hughes, who has represented the state's 7th District (covers parts of Philadelphia and Montgomery County) since 1994.
Hopkins made appearances on the House and Senate floors where each chamber presented him with a proclamation honoring his record-breaking victory over Jean Pascal in their championship rematch on May 21 in Montreal.

Following the proclamation on the Senate floor, Hopkins was given the opportunity to speak, and in true Hopkins style, inspired every person in the room as he shared his life story of overcoming obstacles and investing in health in order to reach where he is today.

Hopkins ended his speech by saying, "Whether you are a Democrat or Republican, whatever decisions we all make together as one, it affects lives."