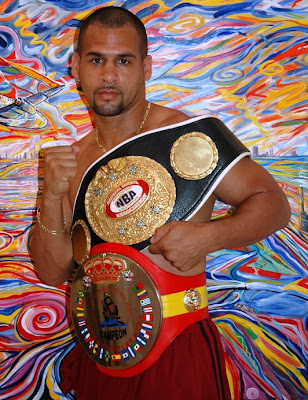 “Fire & Fury” is being promoted by KZ Event Productions, which is owned and operated by the Shumenov brothers, Beibut and Chingis, in Las Vegas. Shumenov-Santiago is somewhat of a boxing anomaly, featuring a pair of college graduates in a world title fight.

WBA #15 ranked Santiago (31-4-1, 19 KOs), fighting out of Ocala, Florida, is a two-time world title challenger. His signature victory was a fourth-round technical knockout of 30-1 Elvir Muriqi. Santiago was also featured on the third season of The Contender reality television series.

The Bronx native who lives in Ocala (FL) has had two proposed fights fall out, including one against Roy Jones, Jr. “I promised myself and my family that I would continue boxing as long as I still enjoyed it,” the University of South Florida graduate (business & accounting major) explained. “I still do. I opened a business - a gym around boxing (Central Florida Boxing – www.centralfloridaboxing.com) –to have something to fall back on when I retire from boxing. It’s turned out be a great thing. I had those two fights fall through but things like that happen when you’re self-promoted. But I stayed in my gym, working hard, and now I’m blessed to have this opportunity.”

“I don’t know Beibut but he’s obviously a unique individual having already accomplished what he has in 11 pro fights,” Santiago remarked. “But this is a business and I will do what I have to do in the ring against him. Boxing is what we’ve both chosen to do. Fighting is easy; it’s everything else in this business that’s difficult. Dealing with his people, though, I can tell you, they’re as professional as any I’ve ever worked with in boxing. It may be surprising for me to say this but, they’re very honest, first-class people. Everything they’ve said has actually happened.”

“I don’t really have very much of an experience advantage over him,” Danny added.”Don’t look past his Olympics experience, on the grandest stage, fighting the best in the world. I may have more pro fights than him but he’s fought the same class of fighters, pro and Olympians, as I have.

“I’m not trying to butter him up but Shumenov is very exciting, smart, and strong. And just look at him - he’s a ‘brick-house!’ I need to be in the best shape of my life for this fight to fulfill the dream I had as a kid that I now have as a grown adult (win a world title).”

Go on line to www.KZEventProductions.com for additional information about “Fire & Fury,” Shumenov or any of the KZEvent Productions fighters.
Posted by Michael Gerard Seiler at 6:25 PM