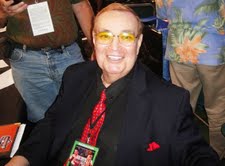 By: Benny Ricardo
The pipes were clear; the energy through the roof and the main event took place right where he likes it, in his kill zone area. The Colonel, Bob Sheridan, was back on the air calling another championship fight that is rapidly nearing the thousand mark. Top Rank’s Director of TV production, Marty Corwin told the Colonel “You were in mid-season form, it was like you never left.”

A legendary announcing career that dates all the way back to his call of the “Rumble in Jungle” between Ali and Foreman, at the Mai Stadium in Kinshasa, Zaire back on October 30, 1974, was back on the air. Only this time The Colonel’s journey to announce a fight was longer than any he had ever had for this itinerary transcended life and death.

Saturday night from the Home Depot Center in Carson, California, the main event of Brandon Rios and Urbano Antillon was the kind of fights the Colonel loves to call. It took place in the zone he likes to call “The Kill Zone”. It’s that zone where boxers enter inside arms length where angles, waist and head movements are vital for survival. It is the kill zone because a fighter enters it willing to pay the price of knowing it is kill or be killed.

Rios was magnificent as was Antillon in bringing the fight to each other, it was one of those great fights where the ebb and flow had the Antillon and Rios fans seemingly doing the wave, taking turns jumping up and down. But even if it would not have been that great a fight, no problem. The Colonel has been known to use his pipes and rhetoric to make an ordinary seem extraordinary.

As the Colonel likes to describe his craft “I’m an entertainer, not a journalist and I am having fun calling the fight.” Nobody has had more fun in life than the Colonel but when faced with death he realized “Dying is easy, living is the hard part.”

Back from 30 days in a coma with fluid in his lungs, pneumonia, major back surgery and a rehab program that was 24/7 for over 6-months, The Colonel is back and there is no ten count to be heard for him, just his booming voice and passion for the sport he loves.

It was as if the Colonel’s beloved friend, ring announcer Jimmy Lennon announced the verdict of it all, “And still…the heavyweight champion announcer of all time…The Colonel, Bob Sheridan.
Posted by Michael Gerard Seiler at 9:06 PM