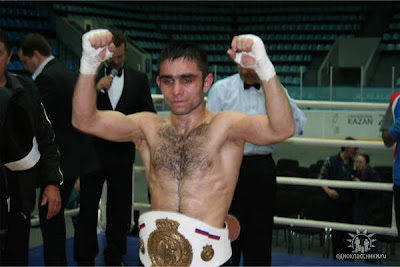 The southpaw Usarov, picked up the vacant WBO European belt with a twelve-round shut-out over Alexander Fedorov in October of 2009. Since then he has fought just twice, including a win over previously undefeated Ilhom Rahimov. Looking to be more active and to begin making a name for himself on the world scene, Usarov signed with Joe DeGuardia's Star Boxing earlier this spring. The bout on Saturday night will only be Usarov's second outside of Russia.

"Sahib is a very exciting fighter, and we think he can immediately become a major player in his division," stated Joe DeGuardia, CEO of Star Boxing. "This is a great opportunity for him to be able to fight on a card of this magnitude, before a sold out crowd. We expect Sahib to win and win impressively, and are looking forward to bringing him over state-side sometime in the very near future."

Usarov vs. Acevedo is scheduled for eight rounds in the super bantamweight division. In the main event, Lucian Bute (28-0, 23KO's) defends his IBF Super Middleweight Championship against IBF #1 contender Jean-Paul Mendy (29-0-1, 16KO's). Both bouts are promoted by EuroPlus Computers S.R.L. and Interbox in association with Joe DeGuardia's Star Boxing.
Posted by Michael Gerard Seiler at 10:18 AM