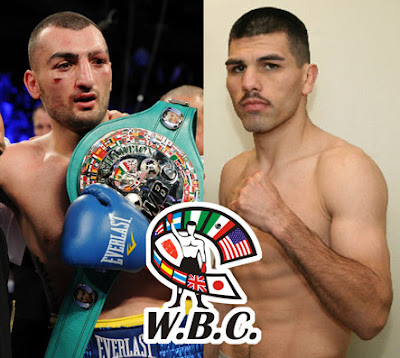 The World Boxing Council has ordered the free negotiations period for the Martirosyan vs. Angulo fight to determine the mandatory challenger in the WBC Super Welterweight division.
Vanes Martirosyan, of Armenia (30-0-0 / 19 KO´s), captured the WBC Super Welterweight Silver Championship in a spectacular knockout against Saul Roman. Alfredo Angulo, of Mexico (19-1-0 / 16 KO´s), defeated Joachim Alcine in his last fight by an impressive first-round knockout.

If there is no agreement in the free negotiations period, a purse offer will be conducted at the WBC Executive Offices in Mexico City on August 19th, 2011.
Posted by Michael Gerard Seiler at 8:37 PM