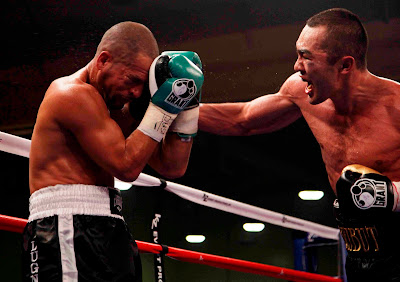 “I didn’t count the punches,” Shumenov said after the fight, “but I could have thrown more.”

Shumenov (12-1, 8 KOs) systematically broke-down a game Santiago (31-5-1, 19 KOs), WBA No. 15, using his jab and going to the body in the early rounds. “It definitely wasn’t like I expected,” Shumenov commented about the start of his third successful title fight. “He specifically prepared for my style. I knew he was tough but not that tough. He’s durable and can take good punches. I developed a blister on my right foot in the third round that made it hard for me to maneuver. I couldn’t put my combinations together because I was uncomfortable.”

Former world light heavyweight champion Jean Pascal watched the fight from ringside. “He said he wanted to fight me in Canada,” Shumenov said after speaking with Pascal in the ring. “I said he was from Canada, I’m from Kazakhstan, so let’s fight in Las Vegas where all champions dream of fighting. Pascal, Cloud, Dawson……I’m ready for anybody!”

“Shumenov is a great fighter,” Santiago remarked. “He has a good, sound technique. My eye swelled and got worse and I had trouble seeing the punches at the end. I thought I could have gone longer but, you live by the sword, you die by the sword.”

Hudaynazarov and Ahmedov are both members of KZ Event Productions table.