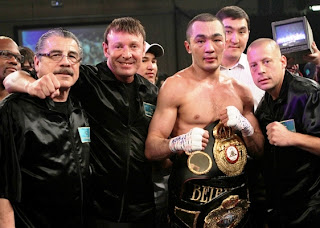 LAS VEGAS (August 10, 2011) – Unification remains the goal for World Boxing Association (“WBA”) and International Boxing Association (“IBA”) light heavyweight king, Beibut Shumenov. If, however, none of the other 175-pound world champions – Bernard Hopkins, Tavoris Cloud and Nathan Cleverly – are willing or available to put their title belts on the line against Shumenov, the 2004 Kazakhstan Olympian is interested in taking on former world titlists and leading contenders Jean Pascal and Zsolt Erdei.

Standing in the ring next to Shumenov during post-fight interviews was Pascal, who said he wanted to take Shumenov’s title belts back to Canada. Beibut quickly accepted the challenge with a qualifier, directly saying to Pascal, “You’re from Canada, I’m from Kazakhstan; so, let’s do it where all champions dream of fighting…Las Vegas.”

Shumenov’s first option, naturally, would be to fight Pascal in Kazakhstan, where it would be a huge draw. But In 29 pro fights, Pascal (26-2-1, 16 KOs) has fought only twice outside of his adopted home in Canada, the last time in 2008 when he lost a 12-round decision in the United Kingdom to Carl Froch for the vacant WBC super middleweight championship. “Pascal is a top-level fighter,” Shumenov said about his potential challenger.

“Erdei’s people have already shown interest in fighting me if Pascal isn’t,” Beibut noted. “Erdei is unbeaten and a two-time world champion, first at light heavyweight and then as a cruiserweight. He’s moved back down to light heavyweight and is a top challenger, more of a boxer than puncher, and now he trains (Philadelphia) in the U.S.”

Erdei and Pascal are rated No. 4 and No. 5, respectively, in the current WBA ratings. Shumenov, who says he’ll fight one more time in 2011, concluded, “I’m ready to fight any of the top light heavyweights in the world.”

Shumenov (12-1, 8 KOs) set a light heavyweight record for capturing a world title in the fewest career fights, 10, when (Jan. 10, 2010) he won a 12-round decision against Gabriel Campillo in Las Vegas. In three successful world title defenses, Shumenov won a unanimous 12-round decision versus No. 1 mandatory challenger and previously undefeated Viacheslav Uzelkov (UDEC12), followed by a six-round knockout of three-time world champion William Joppy (KO6), and then his recent victory by ninth-round TKO versus WBA No. 15-rated Santiago.