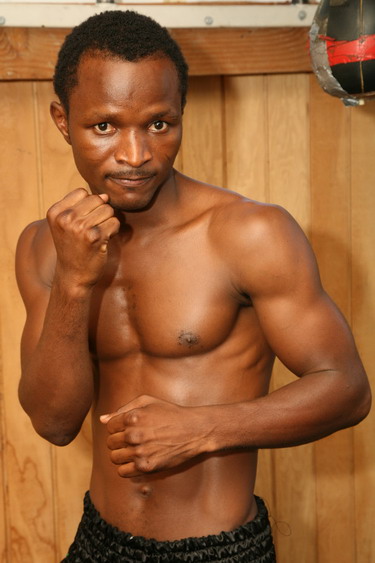 Round 6: Darchinyan's face is swollen. Agbeko is landing more straight rights. Darchinyan is showing signs of slowing down.

Round 7: Agbeko has more energy. Darchinyan is one-dimensional and is having trouble landing a clean shot. Agbeko is starting to dominate and take control of this fight. Darchinyan throws a straight left and scores a knockdown, but after seeing the replay, Agbeko clearly slipped. Darchinyan is being kept off-balanced because of Agbeko's right hand lead. The time keeper made a mistake and this round lasted 4 minutes.

Round 9: Darchinyan lands a straight left, but Agbeko is moving his shoulders well. Darchinyan is still being kept off-balanced by Agbeko's output of punches. Agbeko lands a right and Darchinyan lands a left. Get yourself a new punching bag and save with $2.95 shipping.

Round 10: Darchinyan fires and lands a right hook. Agbeko starts throwing hooks. Darchinyan is bleeding above his right eye from an accidental clash of heads. Darchinyan hits Agbeko with a straight left, but takes a straight right from Agbeko. Agbeko is keeping his chin tucked in and is staying low.

Round 11: Agbeko hits Darchinyan with a straight right followed by a left hook. Darchinyan pushes Agbeko to the canvas. Darchinyan is looking to land a straight left, but he struggles as Agbeko gets his punches off first. Agbeko continues to beat Darchinyan to the punch.

Round 12: Agbeko lands another straight right. Darchinyan counters with a left. Agbeko continues to land his shots. A battered and bloody Darchinyan, cannot do much damage with his one-dimensional attack.

Overall Summary: Well fight fans, no controversy from the judges on this bout. Joseph Agbeko clearly won this fight by a 12 round unanimous decision. Vic Darchinyan had absolutely no answer for Agbeko's right hand lead. Agbeko did most of the damage to Darchinyan in this fight with that punch. Darchinyan was not able to overwhelm a bigger opponent with his one-dimensional attack of firing a powerful straight left hand. Agbeko beat Darchinyan to the punch all night long and possessed the superior hand speed. Darchinyan could not alter his style. He was lunging in and telegraphing his punches. Agbeko knew what was coming, adjusted and used his range to fire accurate right hands before Darchinyan could get his punches to the target.

It's not a mystery how Vic Darchinyan fights. His style was effective in the past because his damaging punching power hurt fighters that were his size or smaller. He cannot dominate a bigger man the same way. This is his second professional defeat against a bigger opponent; the other coming at the hands of the "Filipino Flash" Nonito Donaire. Darchinyan aggressively comes forward and tries to overwhelm his opponents with his powerful left hand. This style is not effective against an opponent like Agbeko, who is taller, faster, slips punches efficiently and is naturally the bigger man.

Darchinyan's right jab was missing tonight too. He did not use it enough and as a result, got hit more coming forward. At times, the 33 year old Darchinyan will use his jab to find range, but does not throw his punches off of it or set up combinations. Boxing's old cliche continues to be true: "A good big man beats a good small man." Tonight, Joseph Agbeko showed the world that he is a complete fighter.