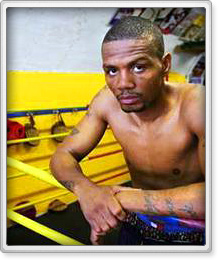 Nate Campbell Gets Robbed, Fight Should Be Declared A No-Decision

Round 1: Bradley is boxing well. Campbell is the aggressor. Campbell is having trouble landing an overhand right, his best punch. Bradley landed a mix of good body and head shots.

Round 2: Campbell is landing more punches this round. However, Bradley is still slipping Campbell's punches well and is landing the cleaner shots.

Round 3: Bradley dominated the round and was beating Campbell to the punch.

Overall Summary: There was an accidental clash of heads and the replay showed it caused a diagonal cut above Nate Campbell's left eye. However, referee David Mendoza never made a ruling that the cut was caused by a clash of heads. After the round, Campbell told the corner to stop the fight because he could not see. Then, he said he was seeing spots out of his left eye. Campbell's corner stopped the fight.

After the fight, Mendoza acknowledged that there was a clash of heads to Showtime's Jim Gray, but said that it was unclear to him that it caused the cut because Bradley continued to throw punches. Roll? Save money on your next judo gi.

Although David Mendoza has officiated 11 championship fights, he made a very bad judgment tonight. On the replay, it clearly shows that both fighters clashed heads. Nate Campbell turned to Mendoza and said he was headbutted and rubbed his head with his left glove. You can start to see the cut open on Campbell's head as he backed into the ropes. Then, Bradley went after him and landed punches. Campbell was trapped in the corner and covering up.

Campbell may have thought that since the fight did not go 4 complete rounds, that he and Bradley would receive a No-Decision on their records if he stopped fighting. I'm not disputing that Campbell was seeing spots. I believe Campbell was seeing spots, but I also believe that he knew if the fight got stopped from an accidental headbutt, he would not suffer a loss and decided to quit. However, with no ruling made by Mendoza that the cut resulted from an accidental clash of heads, Bradley wins this bout by TKO at the end of the 3rd round.

Campbell was complaining furiously after the bout. He wanted Bradley to admit that he received the cut from the headbutt. It was a bad call, but Campbell still quit on his stool. Did Campbell quit because Bradley was winning the fight up to that point and beating him to the punch? I would like to see a rematch and I think Campbell deserves one because of Mendoza's bad decision. Who knows what would have happened if the fight continued without the headbutt?

Round 3: Alexander nails Witter with a lunging right hook to the head. Witter suffers a cut on the side of his right eye.

Round 5: Witter almost dropped by Alexander's straight left. Both fighters were throwing a punch at the same time.

Round 6: Alexander connects with another right hook. Witter is throwing his punches too wide. Witter is elusive, but throws one punch at a time and does not want to engage.

Round 7: Witter lands a straight left from the southpaw stance.

Round 8: Alexander was controlling the fight. He wanted to let his hands go more, but Witter is a difficult opponent to hit.
In a Junior Welterweight WBC title fight, Devon Alexander (19-0, 12 KO's) defeated Junior Witter (37-3-2, 22 KO's) by a TKO after 8 rounds when Witter quit in his corner. Witter approached Alexander, who was still sitting on his stool, to congratulate him. Witter did not appear to be seriously hurt when he quit.

Alexander, a 22 year old southpaw from St. Louis, Missouri, showed a lot of patience in this fight. Witter presents a difficult style for opponents because he throws wild, unexpected punches and is elusive. Alexander showed poise and stuck to his game plan. Alexander threw combinations off his jab and showed good hand speed. Alexander never lost focus or showed frustration. The 35 year old Witter, never really hit Alexander with a hard, clean punch in the fight. Alexander now has realized his dream of winning the WBC title, a dream he's had since he was 7 years old.
Posted by Michael Gerard Seiler at 11:59 PM

i agree with your overall breakdown of the fight ..Nate Campbell got robbed and he was losing the fight when a opportinity arrised for a clean exit strategy without a loss..and the Referee made a bad call of what should of been a No Decision..and now Campbell is stuck with a TKO unless he can try to appeal..

From the Grandma's Purse said...

In fact, you have given new complexion to the sport known as Boxing...