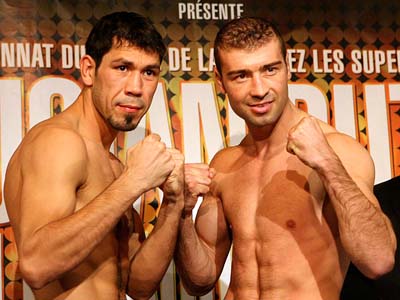 Lucian Bute had something to prove in his rematch with Librado Andrade. In their first encounter, Bute was controlling the fight until he got tired in the 12th round. With three seconds left in the bout, Bute backed into the corner and Andrade nailed him with a right hand. Bute dropped to the canvas, but rose back to his feet. While the referee was conducting the ten count, he momentarily stopped to signal Andrade to stay in a neutral corner. This gave Bute another moment to catch his breath. After the bout, there was controversy because Andrade's corner felt the referee should have continued the count without stopping. Many felt that if the referee did not hesitate, Andrade would have won by TKO. However, Bute did get up and there was no time for either fighter to throw another punch. Bute won via unanimous decision.

Tonight, Bute dominated and knocked out Andrade in the 4th round when he landed a brutal left to the midsection, after flooring him with a straight left to the face in the same round. Bute started fast by throwing the right jab and establishing his edge in hand speed. He hit Andrade with three clean, straight lefts off the jab in the 1st round. Andrade showed a durable chin when he took a right hook-straight left combination from Bute in the 3rd round. Andrade is known to take a solid punch very well, but that might not be the case anymore. In the 4th round, Andrade struck Bute with consecutive right uppercuts. Then, Andrade appeared to be ready to throw a punch when Bute stepped forward and dropped him with flush, straight left. Andrade got back to his feet, but it seemed as if his equilibrium was off. Andrade attempted to land a straight right to Bute's head when Bute countered with a punishing left that landed on Andrade's waistline. Andrade could not beat the ten count.

This was a very impressive performance for Lucian Bute. Many people felt this fight would go the distance because of their first encounter. Andrade is a very tough fighter, who likes to pressure opponents, while Bute likes to stay on the outside and fight. After dropping Andrade twice with two solid shots, you have to wonder why Lucian Bute was not included in Showtime's "Super Six" Tournament? Is he not one of the best at 168 lbs. in the world? With the victory, the 29 year old Bute improves to 25-0, 20 KO's. 31 year old Librado Andrade falls to 28-3, 21 KO's. Hang a punching bag without drilling with a heavy bag stand.

Funeka Robbed Of A Decision Victory Against Guzman
On the undercard, Ali Funeka battled Joan Guzman (29-0-1, 17 KO's) to a 12 round majority draw. This was a bout that Funeka clearly should have won. In the opening round, Guzman came out firing lefts and rights to the body of the taller Funeka. Funeka was not really snapping his jab, rather he was pushing it out there. Guzman took full advantage of it by landing his overhand right. In the 3rd round, Guzman landed a solid overhand right to the body. Funeka picked up the pace and started to land some hard overhand rights off his jab. Funeka's jab gave Guzman a bloody nose.

Funeka was trying to keep the fight on the outside. In the 4th round, Guzman suffered a cut under his right eye after his head collided with Guzman. However, the referee ruled the cut resulted from a punch, which could have been a factor in the decision if the fight went to the scorecards early. Funeka's punches appeared much sharper in the 5th and 6th rounds. He peppered Guzman's face with the jab and connected with right hands following it. At this point, Guzman had minimal success going to the body.

Guzman was getting pushed back by Funeka's jab early in the 7th round. Funeka was comfortable utilizing the jab from a distance and Guzman had trouble getting his punches off. When Guzman got in close range, he was landing big body shots again, but not in combination.

The action picked up in the 8th round as Guzman imposed his will and was more aggressive. However, Guzman got rocked by a right hand from Funeka as he went to release his punch at the same time. With Funeka having the reach advantage, his punch got to the target quicker. Guzman survived the round, but on wobbly legs. Funeka dictated the pace of round 9 as he successfully employed his sharp, accurate jab again and landed right crosses off of it.

In the 10th round, Guzman fired punches without much steam on them. The crisp combination punching of Funeka really hurt Guzman. Funeka became more accurate with his left hook as each round passed. With a very bloody face, Guzman ate some flush right hands from Funeka in the 11th round. Guzman was frustrated and leaned on the ropes to try and trick Funeka into coming forward recklessly. When the fight got into the 12th round, Guzman continued to show his toughness by coming forward. Funeka met Guzman with his own aggression and repeatedly beat him to the punch with left hooks and right hands.

This bout was declared a 12 round majority draw. It was an absolute robbery. The official judges scored it 114-114 twice and 116-112 for Ali Funeka (30-2-3, 25 KO's). I had the fight scored 9 rounds to 3 or 117-111 for Ali Funeka. What more does a guy have to do to win a fight? Funeka beat Guzman to the punch, bloodied his face and controlled the pace at his range, for the majority of the bout. It is very sad the judges did not reward Funeka for the effort he put forth tonight. Save $10 on your subscription to SI.
Posted by Michael Gerard Seiler at 10:23 AM